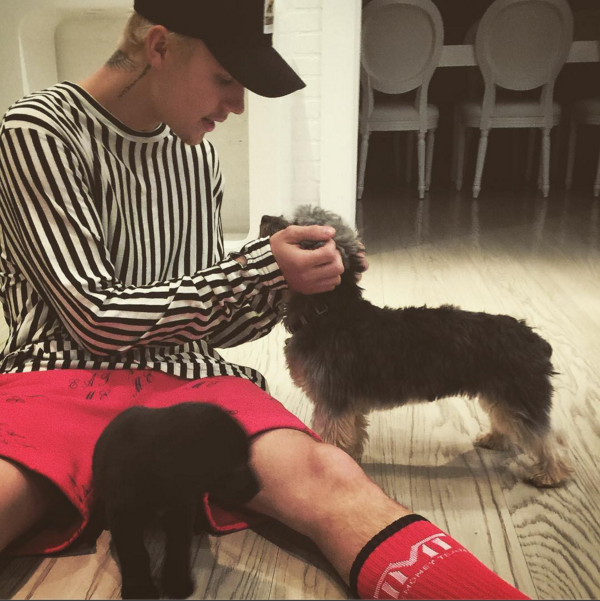 Justin Bieber is taking a break from dating to spend sweet time with his new puppy, Phil.

“New addition to the family his name is Phil,” the 21-year-old singer wrote.

He also posted photos of Phil with Esther, Bieber’s other dog.

“Can’t make Esther too jealous,” he wrote of his photo turning his attention to Esther after posting another photo, saying, “Look at Philip’s eyes.”

Meanwhile, 21-year-old singer, Halsey, who sang “The Feeling” with Bieber, covered an explicit version of his song “Love Yourself.”

“How cool is that, you know, there are girls sitting at home, watching the biggest male pop star in the world on stage with a girl whose not necessarily traditionally feminine or like traditionally beautiful,” she told Australian radio hosts in Triple J’s “Like A Version” segment. “That is really, really cool for me.”

“If I was that short-haired punk chick sitting at home, I’d be like, ‘Yes! You go! You get that!’ For the record, I did not get that,” Halsey noted, slamming romantic rumors of them previously.

Bieber’s “Love Yourself” is written by none other than Ed Sheeran, himself. The “Thinking Out Loud” singer co-produced the acoustic guitar and vocals track with Benny Blanco.

Also, Halsey agreed to collaborate with Bieber for “The Feeling” because of the line “jagged like a pill so hard to swallow” from the song’s pre-chorus.

The Originals Season 3 spoilers: Hayley and Klaus at odds; Elijah...