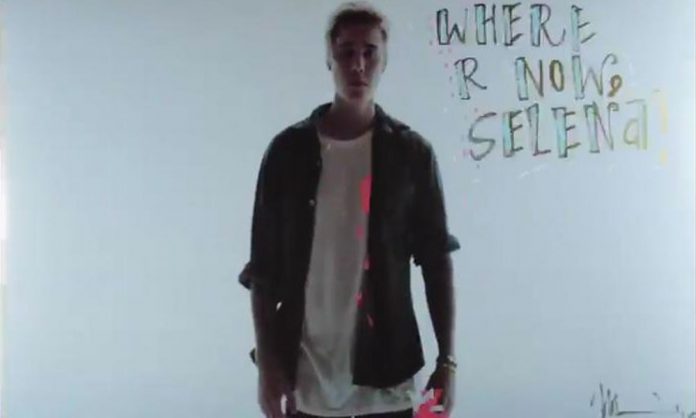 Justin Bieber’s latest music video for his song Where are you now? seems to be sending his ex girlfriend Selena Gomez mixed messages.

In the video, there were graffiti art with Selena’s name on them but the messages seem conflicting. There were those hinting that Justin was missing his former girlfriend like Jelena forever, and I miss you Selena. On the flipside, there were also shots of messages seeming to diss the singer actress.

In one shot, there was the question Where are you now Selena? while another showed a doodle of Selena and her former flame Zedd, standing under the sun.

A report by Seventeen cited Bieber’s reps explaining that fans were responsible for creating the graffitti art and that the singer had nothing to do with it. Still, fans insist on the connection because of the song’s lyrics hinting at a love gone wrong, and Justin’s decision not to do anything about the fan art if the song didn’t pertain to his ex.

Meanwhile, after reports that the former Disney star was spotted on a night out with singer Ed Sheeran, there are also speculations that Gomez might be dating Cody Simpson when she posted photos of them hanging out on her Instagram.

In her Instagram, Selena posted a photo her in a laid back pose eating ice cream with Cody and two other friends, captioned: These days are always the best days.

The cute photo was also shared on social media by Cody’s mom.

The photo sparked immediate internet attention because Cody Simpson is known to be very close to Justin Bieber. As a matter of fact, Cody was the opening act for Justin’s tour, reported the Daily Mail.

Selena was also known to be a close friend of Cody’s ex Gigi Hadid.

Aside from the Instagram post, the two were also snapped together as they spent the day together in Venice, California with some friends.