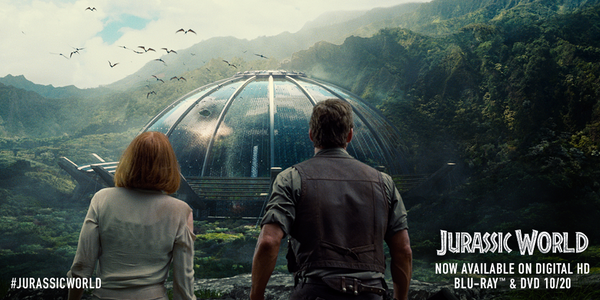 After a very successful comeback to mainstream pop culture, the “Jurassic Park” franchise is said to be propelling the stakes to greater heights with the upcoming sequel to last year’s “Jurassic World” by moving beyond closed areas.

The tip comes from the official Twitter account of the sequel with its profile picture beaming the “Jurassic World 2” logo. This is an entirely different one from its predecessor’s which sports the “Jurassic Park” stamp. Nevertheless, both accounts are confirmed to be officially run by the people behind the franchise.

As it turns out, hints that the weaponized dinosaurs will eventually get out in the open have been peppered throughout various interviews with “Jurassic World” director Colin Trevorrow. Talking to the Wired last year, the filmmaker was quoted in saying:

“[It will not be] just a bunch of dinosaurs chasing people on an island, that’ll get old real fast. I feel like the idea that this isn’t always going to be limited to theme parks, and there are applications for this science that reach far beyond entertainment. And when you look back at nuclear power and how that started, the first instinct was to weaponise it and later on we found it could be used for energy.”

Despite handing the directing reins to J. A.. Bayona, Trevorrow is still very much involved with the sequel as he is part of the writing pack honing the story for “Jurassic World 2.” As has been publicly confirmed, Trevorrow, will instead direct the ninth episode of another revitalized franchise in “Star Wars.”

The decision to tap Bayona to pull the ropes for the expanded follow-up movie may be an indication of what kind of tone the franchise is gearing for . The Spanish filmmaker who has done the heart-wrenching catastrophe-themed project “The Impossible” may take on a similar approach given Trevorrow’s original vision for the revived franchise.