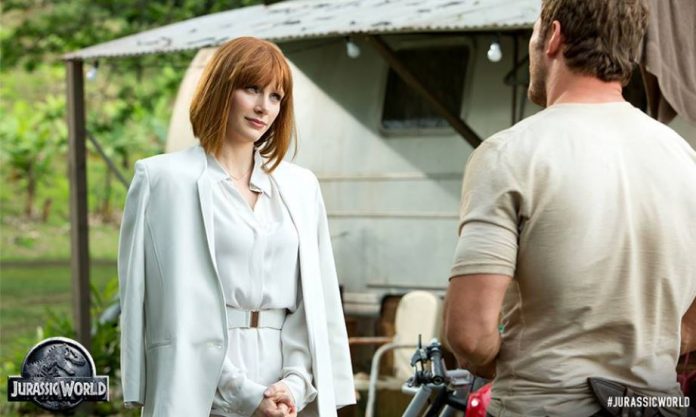 “Jurassic World” became the surprise hit of 2015 as the science fiction adventure film generated over $1.6 billion in revenue and became the fourth highest grossing film of all time. Apart from its commercial success, the film also became a pop culture phenomenon as it spawned a lot of memes, with the most popular ones involving Chris Pratt’s character Owen Grady training the raptors, and Bryce Dallas Howard’s Claire Dearing running around in heels.

In a recent interview, Howard said that she found the memes and GIFs of her running in heels “hilarious” and that she expects it to be a running joke for the rest of her life. But while she certainly appears amused about all the fuss made over Claire’s choice of footwear, she told The Huffington Post that she received a text message from director Colin Trevorrow which read, “#NoHeels2018.” The message suggests that her character will be wearing more sensible footwear in the sequel.

“As far as I’m aware, I’m just gonna keep saying it to make sure that is actually what happens,” she said about the director’s message.

Pre-production is ongoing for “Jurassic World 2” as producer Frank Marshall told Collider that he has met with director Juan Antonia Bayona, who will be taking over the directorial reigns in the sequel. Trevorrow is staying on as the sequel’s scriptwriter. Marshall confirmed that they will be shooting in Hawaii again and that they are hoping to start sometime in early spring 2017.

Jurassic Outpost reports that a starting date for filming the sequel has been released, and that production will start in Hawaii on Feb. 27, 2017. It is unclear if the date is the actual start of the shooting or if it pertains to when the crew will begin constructing sets in preparation of filming.