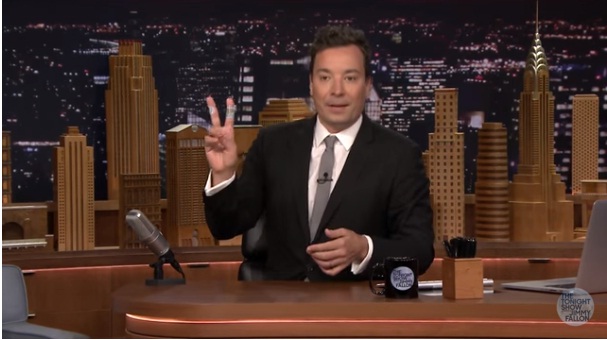 Jimmy Fallon, 41, who was being honored the Elmer Award for Excellence in Humor, traveled to Boston last Saturday and was in Harvard when an accident happened  he fell and injured his right hand.

According to Deadline, the comedian was in the middle of celebrating his award in Harvard Lampoon. He wasn’t able to see that a woman has knelt down along his path after grabbing a bottle of Jaegermeister. When he turned around after getting the drink, he tripped and landed on the ground.

People stopped and asked if he was fine and said he’s okay. Nevertheless, the funny man was sent to the Massachusetts General Hospital emergency room for a quick check to make sure that there are no further injuries. Hollywood Reporter reported that he left the hospital the same day, to the relief of a lot of fans.

The witty host took to Instagram then to update his fans on how he was doing in the middle of his latest accident. He posted a photo of his right hand with his index finger wrapped in a band aid and captioned it, “Nothing that a few band aids couldn’t fix.”

It can be remembered that just this summer, Fallon had an unusual but serious finger injury. He explained on “The Tonight Show” how he accidentally fell off at home, almost lost a finger on his left hand, and stayed at the ICU for 10 days for the recuperating process during the show’s two-week break off air.

The show, however, was able to make the host’s accident as a source of comedic ideas. Just earlier this month during the middle of Fallon’s nightly monologue, he acted out a hamstring injury and asked for a sub. His predecessor, Jay Leno, then appeared and finished the opening segment for him, to the surprise and delight of fans all over.