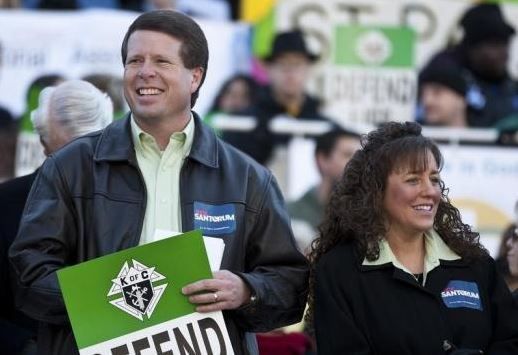 Is the Duggar family about to be torn apart? Latest rumors claim that Jim Bob and Michelle Duggar are divorcing due to constant battles over eldest son Josh. It was said that one parent wants to accept Josh back into the family fold after his rehab stay, while the other allegedly does not want anything to do with the father of four.

InTouch magazine’s latest cover story features Jim Bob and Michelle, and the cover teases that there was a “fight that split the family apart.” The magazine (via Celebrity Dirty Laundry) claims that the pair has been battling over Josh, and that Jim Bob is ready to forgive his son, while Michelle is said to be not as forgiving as her husband. The cover also claims that the pair’s other 18 children have begun to take sides and teases that either Jim Bob or Michelle will be moving out of their Arkansas home.

It appears that the rumors are inaccurate as Jim Bob and Michelle posted a birthday video message for son Josiah on the family’s official Facebook account on Monday, Aug. 29. In the clip, Jim Bob can be seen smiling and looking lovingly at Michelle as she tells their followers about their 20-year-old son’s “loving spirit towards people.”

The Duggars appear to have gotten over Josh’s back-to-back scandals in 2015 as his siblings seemed to have moved on to other things in their new reality show, “Jill and Jessa: Counting On.” In May 2015, it was revealed that Josh molested five young girls when he was just a teenager, and two of those girls happened to be his sisters, Jill and Jessa. The molestation scandal prompted the cancellation of the Duggar’s reality show, “19 Kids and Counting” on TLC. After a few months, Josh was found out to have an Ashley Madison account, and the 28-year-old admitted to cheating on his wife and having a porn addiction. Shortly after, Josh went to a faith-based rehab for six months to seek help for his problem.

Jim Bob and Michelle have yet to comment on the breakup rumors.