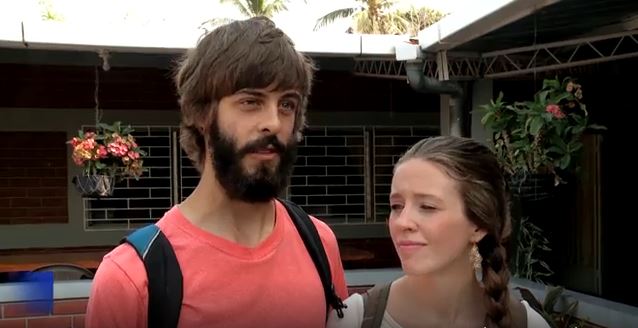 Is Jill Duggar expecting her second child with husband Derick Dillard? Pregnancy rumors swirled when Jill took to Instagram to post a brand new picture of their homecoming, and the “Jill and Jessa: Counting On” star’s followers immediately took to the photo sharing app to take part in the speculation game.

Jill uploaded a photo on Aug. 7 which shows the reality star, Derick, and some relatives at the airport. It was captioned, “So happy to be back home for a visit!” Jill is seen carrying youngest sister Josie on her hip, and fans thought that the 25-year-old might be hiding a baby bump.

Another reason why pregnancy rumors started to come up is because the latest trailer for the new season of their TLC show features Jill and Derick talking about having another baby by next year.

In the season finale of “Counting On,” Jill addressed the constant pregnancy rumors, saying that she is not yet expecting.

“I’m not pregnant yet, that’s the question everyone keeps asking me,” said Jill.

Derick also gave his take on the pregnancy claims, saying, “I feel like we will have another child. I just don’t know how. It will probably be a naturalized citizen of the family.” In the final scene, Derick said that they are planning to expand their family of three.

The couple, along with 1-year-old son Israel, are home for a short stay in Arkansas. Since last year, the pair has been living in Central America, doing missionary work and studying Spanish while raising their child. On their blog, the couple said that they will be staying in the United States from August until the fall, and it is expected that the family will be filming new scenes for season 2 of “Jill and Jessa: Counting On.”

Jill and Derick have yet to comment on the latest pregnancy rumors.

'Fairy Tail' chapter 499 spoilers, news: Juvia to kill herself to...