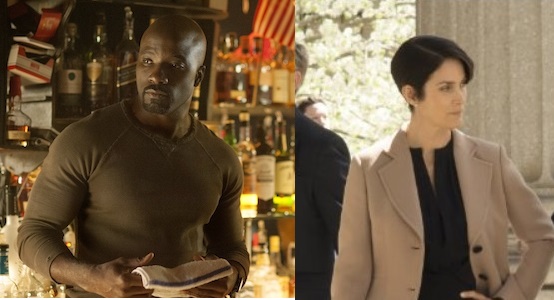 Netflix’s “Jessica Jones” will soon be available, and fans are already excited to know how the life of the superhero will be told in the series. Meanwhile, Carrie-Anne Moss and Mike Colter who will portray Jeryn Hogarth and Luke Cage in the show, respectively, recently talked about their characters and how they will impact Jessica Jones’ life.

Speaking with Comicbook.com, Moss (“The Matrix Trilogy”) said that she already talked to Marvel a year before she got cast in “Jessica Jones.” Moss explained, “Jeph Loeb called me, pitched the idea of the character and the show, and then I talked to Melissa Rosenberg on the phone. Then I read the first two episodes, I want to say, and I was sold.”

Colter (“Million Dollar Baby”) revealed that he approached the character Luke Cage as he would any other role. “We’re focusing our energy on the character study, what’s going on in this world. But then we’ll give you some of the things that you’re looking for… That’ll keep them entertained as well, but what makes them come back is their connection to the story… how they develop and they’re intersecting.”

Asked about the difference between developing a character for a film and a TV show, Moss said that unlike in movies, she did not have any idea as to how the ending would be. She added that being able to know only a couple of episodes at a time helped her be “on her toes.”

As for Jeryn Hogarth, the actress divulged that she is fierce, strong, and powerful. Moreover, Hogarth goes after what she wants, and she makes decisions “based on greed, status, and sex.”

All episodes of the first season of “Jessica Jones” will be released on Netflix on November 20, 2015. It will star Krysten Ritter as the titular character, David Tennant as Kilgrave, and Rachael Taylor as Trish Walker.