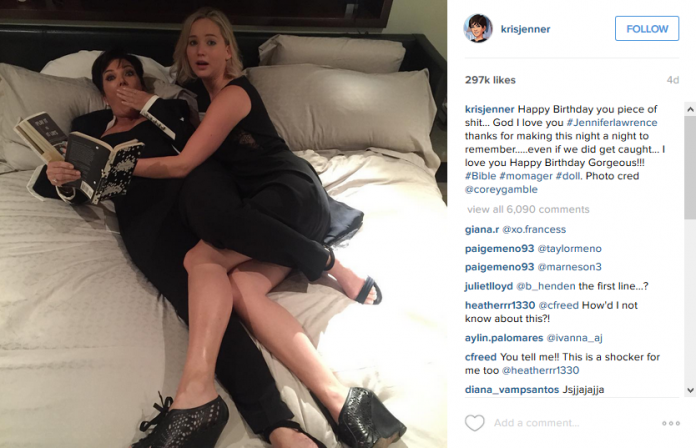 Dubbed as the world’s highest-paid actress for this year by Forbes magazine, Jennifer Lawrence recently celebrated her 25th birthday alongside “Keeping up with the Kardashians” momager, Kris Jenner.

Jenner took to her Instagram to share a snap and captioned it with, “Happy Birthday you piece of sh*t… God I love you #Jenniferlawrence thanks for making this night a night to remember…..even if we did get caught… I love you Happy Birthday Gorgeous!!!”

Without further explaining what happened during the memorable night, fans are speculating what went down as the duo seemed to be having a lot of fun.

New York Times reporter Brooks Barnes revealed the details to his followers and tweeted that he got to interview Lawrence who recounted to him the story.

“My two best friends planned a surprise birthday with a big surprise within a surprise. So I’m there and people start singing Happy Birthday. Kris Jenner comes out holding my cake, which is a pile of sh*t, with a sign that says “Happy Birthday You Pile of Sh*t.” My knees buckled. I fell. Seriously! It was the closest I’ve ever come to losing consciousness. I have NO IDEA. I’d never met her before but we’ve always watched ‘Keeping Up With The Kardashians.’ And then Kris Jenner and I sang ‘Build Me Up Buttercup’ on karaoke and took that picture,” Lawrence said.

Meanwhile, acclaimed director Quentin Tarantino shared that he was actually considering Lawrence for the high profile role of Daisy in his upcoming film, “Hateful Eight.”

In an interview with Vulture, he said he could imaging her playing the only female member of the tough group, “I could have seen Jennifer Lawrence doing a good job with the role. I’m a very big fan of hers. I think she could end up being another little Bette Davis if she keeps on going the way she’s going. I think her work with David O. Russell is very reminiscent of William Wyler and Bette Davis’s.”

However, he said that casting Jennifer Jason Leigh fit perfectly when she auditioned, “Having said that, though, Daisy should be a little older. She should fit in with the guys. Jennifer Jason Leigh came in and was really good. She went for a couple of things that other people just kind of playacted. She had to act like she got shot, and she just screamed bloody murder. I kept remembering Jennifer’s bloodcurdling scream. If it had happened in a house, somebody would have called the cops.”