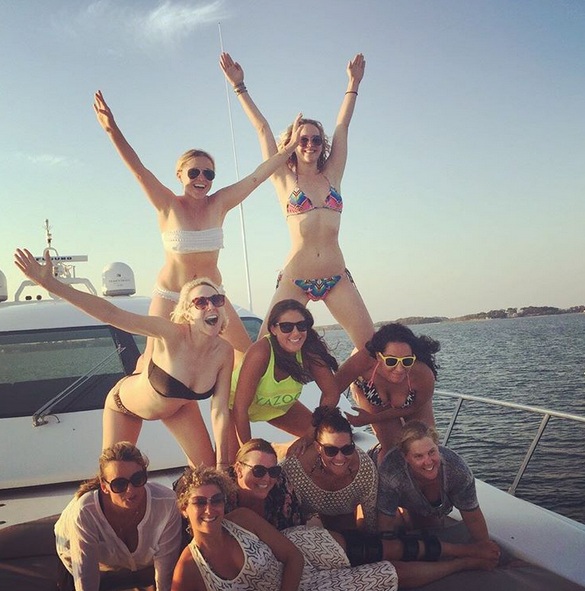 Amy Schumer and Jennifer Lawrence have quickly formed a strong friendship and are now working together on a new movie.

In an interview about her last film as Katniss Everdeen in “The Hunger Games: Mockingjay,” Lawrence told The New York Times that she and Schumer have already written around a hundred pages of a script for movie that they will star in together as sisters. Schumer’s sister Kim, who co-produced “Trainwreck,” will also help in writing the screenplay.

“Amy and I were creatively made for each other. We have different flavours. It’s been the most fun experience of my life. We start the day off on the phone, laughing. And then we send each other pages. And we crack up. I’m flying out tomorrow to see her in Chicago,” said the ‘Hunger Games’ star about working with Schumer.

According to Entertainment Weekly, veteran star Bette Midler might be considered to play Lawrence and Schumer’s mother in the film. The Grammy Award-winning singer made an indirect proposal to star in the film. She tweeted, “Amy Schumer & Jennifer Lawrence are co-writing a screenplay about sisters. Hmm, who could play their mother? She’d have to be DIVINE!”

Schumer and Lawrence struck up their friendship after Lawrence saw Schumer in “Trainwreck” and wrote an e-mail to the comedienne, who also penned the movie.

“I guess I should just say it. I’m in love with you,” she said in her email.

Schumer then invited Lawrence to spend a vacation with her friends in the Hamptons. Soon, photos of Schumer and Lawrence circulated around the Internet and went viral. The two documented their friendship on Instagram with photos of them jet-skiing and building a human pyramid.

Schumer explained to Vanity Fair how the friendship developed saying, “So Jennifer and I have become friends. And I was like, ‘Oh, we’re going on a boat tomorrow, you should come.’ It was kind of hypothetical, and she was like, ‘I think I’m coming,’ and I was like, ‘Oh my God.'”

“I filmed a video of me telling my friends-and they’re like nurses and teachers-that Jennifer Lawrence is coming on a boat with us tomorrow,” Schumer said. “So they’re all screaming.”

Release dates and studio details have not been confirmed for the movie. Meanwhile, fans can look forward to seeing Lawrence in the last installment of the Hunger Games trilogy, “The Hunger Games: Mockingjay Part 2,” coming to theaters this November.