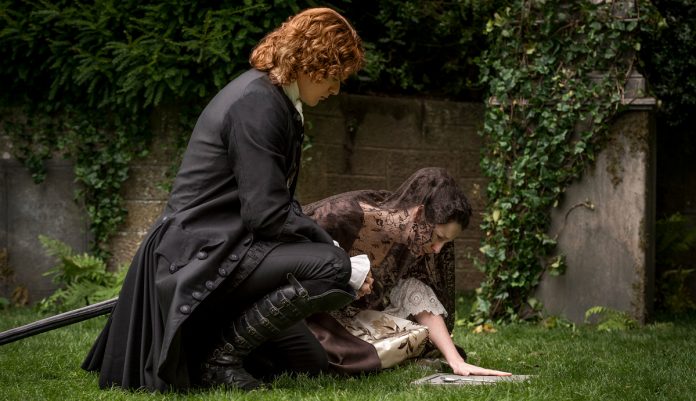 After airing a very tumultuous episode that crammed rape, loss, and betrayal into an hour, “Outlander” season 2 formally leaves the French soil and comes back to their native of Scotland.

The recent episode titled “Faith” had the Frasers deal with a lot of things especially Claire who had to deal with the loss of her child while her husband is in exile.

The chapter ended with Jamie (Sam Heughan) and Claire (Caitriona Balfe) having an emotional visit to their daughter’s grave in Paris before starting their travel back to Scotland.

“I think that Scotland is a very healing place for both Claire and Jamie, and in many ways, it’s a return to their true selves, but I think that this has changed Claire forever,” Caitriona Balfe explained of the upcoming change of backdrop for the show.

Just like how coming to Paris did not necessarily eradicate Jamie’s trauma from his sexual assault from Black Jack (Tobias Menzies), the 36-year-old actress shared that her character will be forever marred by the events that she underwent through in the French capital.

“I don’t think she’ll ever really get over this, and in some ways, it’s hardened her and made her tougher, but in some ways it’s also made her more fragile and brittle. So we’ll see that play out. It takes time, and this whole season, there’s such peaks and valleys of hope and despair, and it’s such a great journey that these two characters have gone on,” Balfe explained.

Before season 2 broke ground, “Outlander” promised a different kind of war waiting for the show in Paris as Jamie and Claire try to prevent the Jacobite rising. It was not an easy stint for the couple as they slowly struggled to try and change the course of history while keeping their growing family together. To make matters more complicated, the sudden re-introduction of Black Jack in the fold has definitely put a strain on the couple’s relationship.

Fortunately, as they come back to familiar grounds, Balfe teased that it will also the start of mending for the lovers. She said, “Jamie really becomes the man that he was always meant to be in the later episodes, and I think Claire is right there alongside him, and you see their bond really deepen and strengthen.”