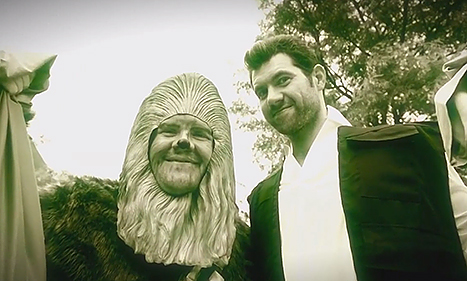 “The Late Late Show” host James Corden made a timely parody of Adele’s new hit song “Hello” in his talk show Thursday night, calling it “A Lonely Halloween” instead. He collaborated with comedian, writer and TV personality Billy Eichner and acted out a series of scenes that are reminiscent of “Hello’s” music video.

Complete with a black and white backdrop and a fully fledged production, the two comedians performs as two friends who have a history of going to trick or treat together every Halloween, but Eichner’s character is suddenly not be able to join Corden as he is going with his family this year. The broadway star also shows his musical chops as he actually belts the notes of “Hello” with a different set of lyrics in line with the theme of the spoof.

Another relative element to the video, aside from it having been shown just in time for Oct. 31 and that it was inspired by new music from Adele, is that Corden and Eichner dons famous “Star Wars” partner in crime Chewbacca and Hans Solo, respectively. The seventh “Star Wars” film,  “Star Wars:The Force Awakens,” is set to drop in theaters Dec 16, which is after 30 years from its predecessor, “Star Wars: Episode VI – Return of the Jedi.”

Corden, who took over the fourth iteration of the David Letterman-created “The Late Late Show” on March 23 from Craig Ferguson after his decade-long hosting stint in the show, has been showing his musical prowess, going on duets with singers like Justin Bieber, Mariah Carey, Stevie Wonders and even rapper Iggy Azalea. He has also played a series of musical roles in films like the baker in the fairytale themed movie “Into the Woods” in 2014 and Keira Knightley’s best friend Steve in the independent film “Begin Again” in 2013.

Check out the hilarious parody video of James Corden and Billy Eichner here.