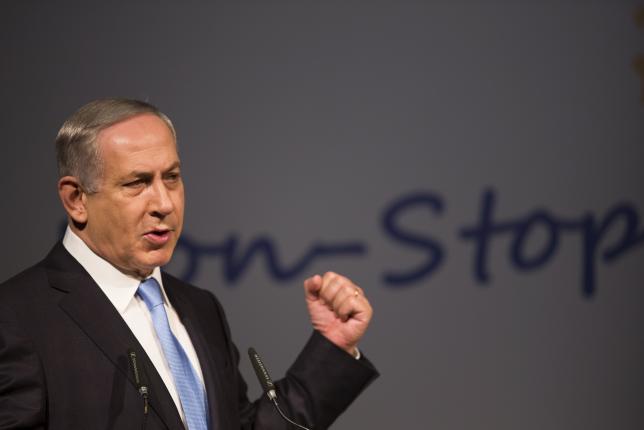 Israeli Prime Minister Benjamin Netanyahu provoked a Holocaust controversy on Wednesday, hours before a visit to Germany, by saying that the Muslim elder in Jerusalem during the 1940s convinced Adolf Hitler to exterminate the Jews.

In a speech to the Zionist Congress late on Tuesday, Netanyahu referred to a series of Muslim attacks on Jews in Palestine during the 1920s that he said were instigated by the then-Mufti of Jerusalem, Haj Amin al-Husseini.

Husseini famously flew to visit Hitler in Berlin in 1941, and Netanyahu said that meeting was instrumental in the Nazi leader’s decision to launch a campaign to annihilate the Jews.

“Hitler didn’t want to exterminate the Jews at the time, he wanted to expel the Jews,” Netanyahu said in the speech. “And Haj Amin al-Husseini went to Hitler and said, ‘If you expel them, they’ll all come here (Palestine).’

“‘So what should I do with them?'” Netanyahu said Hitler asked the mufti, who responded: “Burn them.”

Netanyahu, whose father was an eminent historian, was quickly harangued by opposition politicians and experts on the Holocaust who said he was distorting the historical record.

They noted the meeting between Husseini and Hitler took place on November 28, 1941. More than two years earlier, in January 1939, Hitler had addressed the Reichstag, Nazi Germany’s parliament, and spoke clearly about his determination to exterminate the “Jewish race”.

“To say that the mufti was the first to mention to Hitler the idea to kill or burn the Jews is not correct,” Dina Porat, a professor at Tel Aviv University and the chief historian of Yad Vashem, Israel’s Holocaust memorial museum, told Israel Radio.

“The idea to rid the world of the Jews was a central theme in Hitler’s ideology a long, long time before he met the mufti.”

It is not clear why Netanyahu decided to launch into the issue now, but his remarks came with tensions between Israelis and Palestinians at a new peak, particularly over a Jerusalem holy site overseen by the current mufti.

A German government spokesman, asked about Netanyahu’s comments, said the Holocaust was Germany’s responsibility and there was no need for another view on it.

Responding to the criticism, Netanyahu said on Wednesday there was “much evidence” to back up his accusations against Husseini, including testimony by a deputy of Adolf Eichmann, an architect of the Holocaust, at the Nuremberg war crimes trials after World War Two.

Netanyahu, in a statement issued by his office, did not name the aide, but he seemed to be referring to Eichmann assistant Dieter Wisliceny, who has been quoted in news reports dating back to the late 1940s as having told the war crimes court that Husseini repeatedly suggested the extermination of European Jews to Nazi leaders.

Saeb Erekat, the secretary-general of the Palestine Liberation Organization, accused Netanyahu of using the human tragedy of the Holocaust to try to score political points against Palestinians.

“It is a sad day in history when the leader of the Israeli government hates his neighbor so much that he is willing to absolve the most notorious war criminal in history, Adolf Hitler, of the murder of six million Jews,” Erekat said.

Netanyahu dismissed any such notion.

“It’s absurd. I had no intention of absolving Hitler of his satanic responsibility for the annihilation of European Jewry. Hitler is the one who made the decision,” he said.

But he added: “At the same time, it is absurd to ignore the role the mufti … played in encouraging and motivating Hitler” and other Nazi leaders to take such action.

Husseini was sought for war crimes but never appeared at the Nuremberg trials, and later died in Beirut.

Netanyahu’s defense minister, close ally Moshe Yaalon, said the prime minister had got it wrong. “It certainly wasn’t (Husseini) who invented the Final Solution,” he told Israel’s Army Radio. “That was the evil brainchild of Hitler himself.”

Cape Town less than 90 days away from running out of...