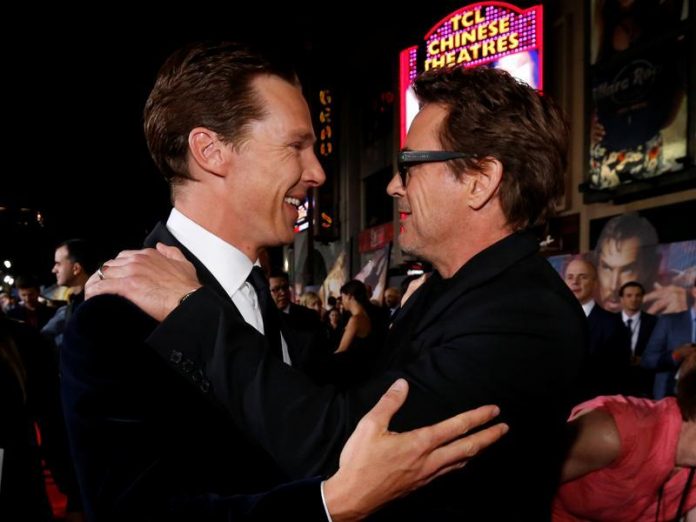 Ironically, despite not having the spotlight solely on him this year, Robert Downey Jr.’s Tony Stark/Iron Man is still getting so much attention. The scenario is understandably so with his prominent role in “Captain America: Civil War” this summer which prompted a campaign for the still yet to be confirmed “Iron Man 4.” Recently, the clamor was reignited with Marvel Studios officially closing out their successful year with the arrival of “Doctor Strange” who is very similar to the snarky billionaire.

For what it’s worth, Cumberbatch’s Stephen Strange is an entirely new character, but admittedly, he is very reminiscent of Tony Stark especially when fans first met the latter in 2008. Both characters can be described as rich Alpha males living in a bubble until an unusual turn of events forces them to recalibrate their perspectives. This is, of course, on top of the very obvious facial hair both men are sporting which has already launched a multitude of memes across social media platforms, not to mention that the actors have played/are playing the sarcastic Sherlock Holmes.

The uncanny similarities are not by any means a coincidence. In fact, Marvel Studios President Kevin Feige dubbed the introduction of Strange as their coolest since Stark’s. Early reviews of the movie from lucky press people invited to a special screening also jumped on the comparison wagon referencing RDJ’s most iconic role to date in the majority of their non-spoiler reactions.

Narrative-wise, it is as if Strange’s debut couldn’t have come at a better time in the Marvel Cinematic Universe (MCU). His emergence in the lore coupled with a unique set of abilities will be more than handy in the brewing fight against Thanos (Josh Brolin) which will be featured in “Avengers: Infinity War.” Furthermore, given that “Doctor Strange” focuses on the mystical arts, it would have been a risk to launch it at an earlier time, especially without the lead-in success of “Guardians of the Galaxy.”

Behind the scenes, Cumberbatch’s well-loved reputation and sense of humor could potentially catapult him in succeeding RDJ’s poster boy status in the MCU. As much as fans would like to hold on to the 51-year-old actor, the truth is age is creeping up on him and there will come a time that he will need to retire his red and gold armor. This is also one of the main reasons why a push for a fitting swan song in “Iron Man 4” has been going on for quite a while. Unfortunately, with Marvel’s jam-packed schedule and silence on the matter, the movie might not be coming anytime soon.

Nevertheless, there will be no shortage of Tony Stark in the MCU with RDJ scheduled to appear in quite a number other properties in the years to come including an appearance in Tom Holland’s “Spider-Man: Homecoming.” Rumors are claiming that he might suddenly pop up in “Doctor Strange” as well.

'Half Life 3' release date: New details regarding the delay of...