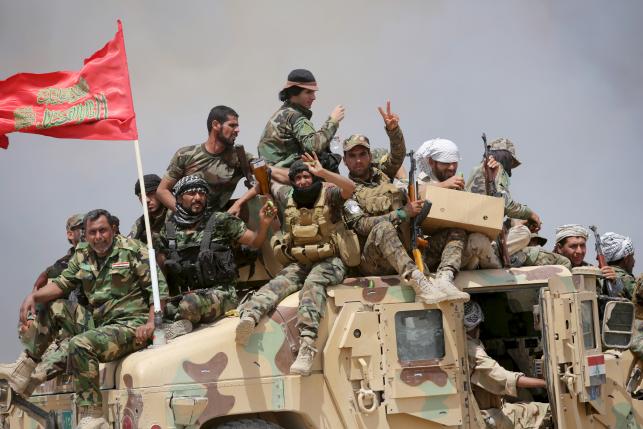 Iraq’s Shi’ite paramilitaries said on Tuesday they had taken charge of the campaign to drive Islamic State from the western province of Anbar, giving the operation an openly sectarian codename that could infuriate its Sunni Muslim population.

The United States described the codename as “unhelpful” while France, which will host a meeting of nations fighting Islamic State next week, accused the Shi’ite-led government of failing to represent fully the interests of all Iraqis.

The Iraqi government is scrambling to reverse the fall of Ramadi, its biggest military setback in nearly a year. Prime Minister Haider al-Abadi has vowed to recapture the city, the Anbar provincial capital, within days.

Shi’ite militiamen, supported by a smaller group of government troops, advanced on Tuesday to within a few kilometers of a university on Ramadi’s southwestern edge, police sources and Sunni tribal fighters allied to the government said.

As they passed through farmland south of Ramadi, the militiamen told people to return home and stay inside, promising they would not be harmed.

The loss of Ramadi a week ago was swiftly followed by the fall of the UNESCO heritage city of Palmyra in Syria, the two biggest gains by Islamic State fighters since the United States began air strikes on them in Iraq and Syria last year.

Islamic State controls swathes of territory in both countries, where it has proclaimed a caliphate to rule over all Muslims according to strict medieval precepts.

Its gains in the past week have raised doubts about the U.S. strategy to bomb the militants from the air but leave fighting on the ground to local Iraqi and Syrian forces.

In Iraq, the regular military’s failure to hold Ramadi has forced the government to send in the Iran-backed Shi’ite paramilitaries. Washington fears this could enrage residents in the overwhelmingly Sunni province and push them into the arms of Islamic State.

A spokesman for the Shi’ite militias, which are known as Hashid Shaabi, said the codename for the new operation would be “Labaik ya Hussein”. This is a slogan in honor of a grandson of the Prophet Mohammed killed in a seventh century battle that led to the schism between Shi’ite and Sunni Muslims.

“The Labaik Ya Hussein operation is led by the Hashid Shaabi in cooperation and coordination with the armed forces there,” the spokesman, Ahmed al-Assadi, told a news conference. “We believe that liberating Ramadi will not take long.”

In Washington, Pentagon spokesman Colonel Steve Warren said the key to victory would be a unified Iraq “that separates itself from sectarian divides, coalesces around this common threat”. Asked about the sectarian codename, he said: “I think it’s unhelpful.”

France, a leading member of the coalition against Islamic State, took the Iraqi government to task, saying there could be no military solution without a political solution among Iraq’s communities.

“We linked the coalition’s support to political commitments by the new Iraqi government, what we call an inclusive policy,” Foreign Minister Laurent Fabius told lawmakers. “This contract is what justified our military engagement and I say clearly here that it must be better respected.”

The Paris meeting on June 2, which more than 20 foreign ministers including U.S. Secretary of State John Kerry are due to attend, aims to plot a strategy including on how to reverse the recent losses to Islamic State.

The militia fighters have performed better than Iraq’s own army, but their presence risks alienating Sunni residents, especially if they emphasize sectarian aims.

Just weeks ago, the Baghdad government and allied militia appeared to be having success against Islamic State, recapturing former dictator Saddam Hussein’s home city of Tikrit.

But Anbar has proven more difficult. The Shi’ite militia had until now stayed out of the area, where Sunni tribes have been hostile to outsiders for generations.

The United Nations expressed concern that civilians trying to flee Ramadi were being halted at police checkpoints, forcing them to return to the combat zone.

Washington hopes the government can win the support of Sunni tribal fighters, a tactic U.S. Marines used in Anbar to defeat al Qaeda during the 2003-2011 occupation of Iraq.

Any increase in sectarian rage plays into the hands of Islamic State, which promotes itself as the only force capable of protecting Sunnis from Shi’ite aggression. It considers all Shi’ites to be heretics who must repent or die, and seeks to provoke a wider sectarian battle to hasten the apocalypse.

The Baghdad government has succeeded in persuading some Sunni tribal leaders to accept help from the Shi’ite fighters, but mistrust runs deep after years of sectarian war in which atrocities were committed on both sides.

President Barack Obama, who won office in 2008 campaigning to withdraw U.S. troops from Iraq, has ruled out sending ground forces to fight Islamic State. Instead, Iran has filled that vacuum, providing aid and leadership to the Shi’ite militiamen.

“NOT DONE A DAMN THING”

The commander of the Quds Force of Iran’s Revolutionary Guards, the main Iranian force backing its allies abroad, mocked Washington for doing too little to help Baghdad.

“Obama has not done a damn thing so far to confront Daesh. Doesn’t that show that there is no will in America to confront it?” Qassem Soleimani said, using an Arabic acronym for Islamic State.

His remarks came a day after U.S. Defense Secretary Ash Carter infuriated Baghdad by saying the Iraqi army had abandoned Ramadi because it lacked “the will to fight”, remarks Iraqi Prime Minister Abadi said showed Carter was misinformed.