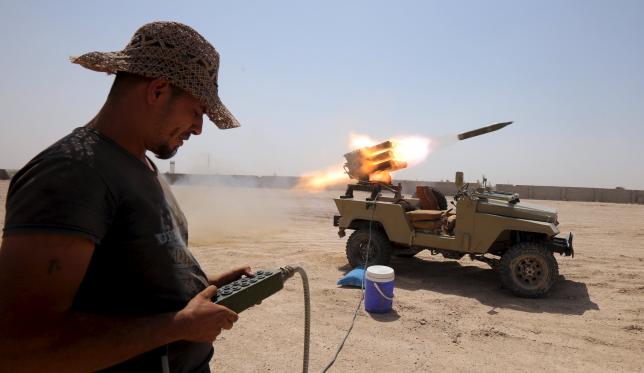 Iraqi troops and Shi’ite Muslim militia forces attacked Islamic State fighters on several fronts on Monday in Anbar, the country’s largest province, at the start of what is likely to be a long and fiercely contested offensive.

“At 5 o’clock this morning operations to liberate Anbar were launched,” the spokesman said.

Military sources in Anbar said they met heavy resistance from the insurgents, who deployed five suicide car bombs and fired rockets to repel their advance on the city of Falluja, about 50 km (30 miles) west of Baghdad.

Iraqi forces also pushed towards the provincial capital, Ramadi, from the west and the south, police sources in the province said. Islamic State supporters said those advances were repelled by the militants.

The sprawling Sunni Muslim province extends hundreds of kilometers west of Baghdad. Many of the towns and cities that line the banks of the Euphrates, snaking down from the Syrian border, are Islamic State strongholds.Islamic State’s capture of Ramadi two months ago marked the biggest defeat for the Baghdad government since the militants swept through the north of the country last June and declared a caliphate in parts of Syria andIraq straddling the border.

Until Ramadi’s fall, Iraqi troops and Hashid Shaabi forces, backed by U.S.-led air strikes, had been pushing Islamic State back, recapturing the eastern province of Diyala and former leader Saddam Hussein’s home town of Tikrit, with the ultimate target of retaking the northern city of Mosul.

Although Ramadi remains the strategic target, military sources and Shi’ite militia leaders have said the initial focus will be on Falluja, which was the first city in Iraq to fall under militant control 18 months ago.

On Sunday, it sharply stepped up air strikes around Ramadi, with 29 out of 39 missions inIraq targeting Islamic State positions near the city.

Iraq has sought to redress its own lack of air power by purchasing F-16 fighter jets from the United States, but deliveries of the 36 aircraft were delayed because of security concerns after the Islamic State offensive last summer.

On Monday, a first batch of four F-16s landed at Balad air base north of Baghdad, an Iraqi air force officer said. Authorities said the planes would join operations in Anbar within days.

Hadi al-Ameri, commander of the largest Shi’ite force, the Badr Organization, told Iraqi television on Sunday he expected the main assault on Falluja to take place after the Eid holiday, which starts later this week.

Residents in Falluja and Ramadi reported heavy bombardment of both cities early on Monday.

Falluja saw the fiercest fighting of the U.S. occupation after Washington’s 2003 invasion to topple Saddam. It has also been a center of Sunni hostility to the Shi’ite-led government in Baghdad.

Abadi initially sought to keep Shi’ite militias on the sidelines in Anbar for fear of inflaming sectarian sensitivities, but the fall of Ramadi in May undermined his position.

In Baghdad on Sunday, at least 35 people were killed in a series of car bombs and suicide attacks in mainly Shi’ite districts. A statement in the name of Islamic State, issued on Monday, claimed responsibility for some of the blasts.