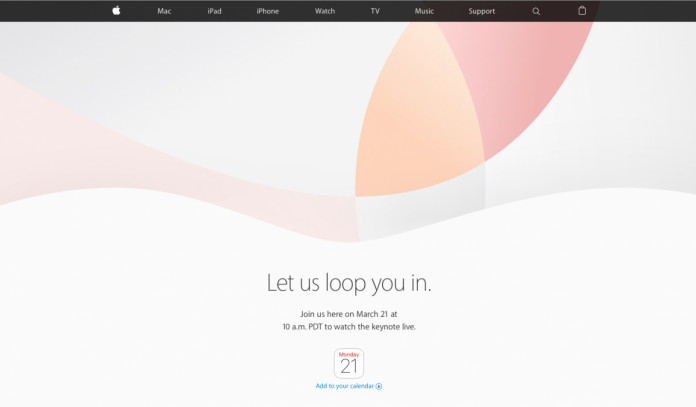 Apple has finally confirmed the widely rumored keynote event happening on March 21. The special invitation-only gathering will take place on their campus located in Cupertino, Califonia with expected presentation of the touted smaller iPad Pro.

The tech giant has released a simple poster stating, “Let Us Loop You In,” and advised that the event will start at 8:30 am with registration at main entrance of 1 Infinite Loop. A caf breakfast will be available, to be followed by a presentation at 10:00 am.

When it comes to the iPad Pro, it is believed that the 9.7-inch model will be presented sporting a design similar to iPad Air with specs of the 12.9-inch predecessor. Specifically, it will include quad-speakers around the sides of the tablet, brighter display, and smart connector that will open doors for automatic pairing with self-powered keyboard attachments and other input devices.

Under the hood, it may be equipped with A9X processor partnered with additional RAM and storage options from 32GB to 128GB. The battery capacity is at 1,642 mAh. There may also be support for the stylus dubbed as Apple Pencil, a 12-megapixel camera that can record 4k resolution videos.

If this comes to fruition, the older models in the line may be discontinued with the predicted omission of the “Air” and elimination of iPad mini 2, originally released in 2013. The pricing is believed to be closer to iPad Air 2 than the bigger iPad Pro while the color options may be offered in space gray, silver and gold.

Since Apple has not disclosed the talk points of the event, available information should be taken with a grain of salt.

Those who may want to tune in to the announcements may do so by live streaming. They are required to be equipped with an iPhone, iPad or iPad touch that is powered with Safari on iOS 7.0 or later, a Mac with Safari 6.0.5 or later on OS X v10.8.5, or a PC with Microsoft Edge on Windows 10.