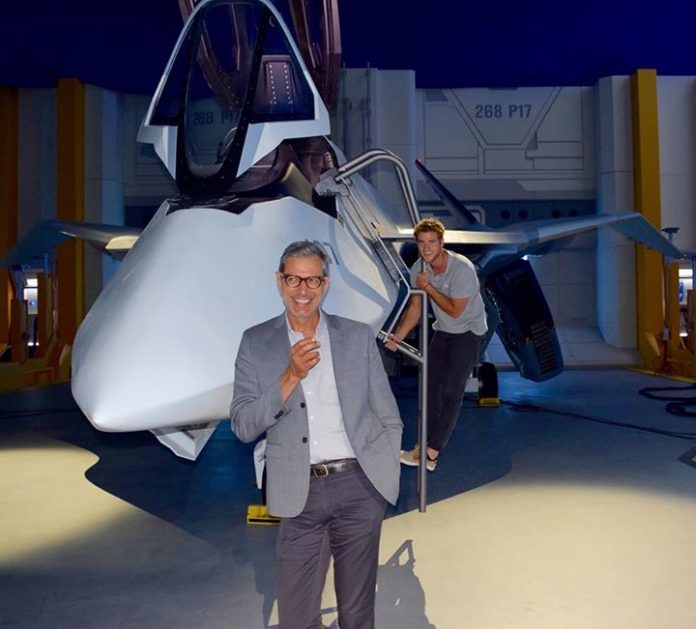 Excitement has been steadily growing for the second installment of science-fiction movie, “Independence Day Resurgence,” slated to release in summer of 2016.

Jeff Goldblum took it to his Facebook page to show awaiting fans a behind-the-scene photo of himself together with co-star Liam Hemsworth on the film’s current set located at Albuquerque, New Mexico. He captioned it with, “So there I was thinking about how I would save mankind when this guy photobombs me. Oh, why hello Facebook, nice to finally meet you. #?IDR.” To which Hemsworth added, “Having a blast filming Independence Day with this legend.”

Following the 1996 classic, the film is said to be in-sync with real time as the story picks up 20 years after the alien invasion of the first movie.

Goldblum returns to reprise his role as the computer genius David Levinson who heads the operation called Earth Space Defense. They reportedly recovered an alien technology which they will developed to create global defense and fight off another possible alien attack. However, it may seem that their efforts will not be enough.

He also shared a short 12-second clip showing what may be an ominous warning, “We’re fighting for our rights to live, to exist,” and caption it with “We thought we wiped them out. The Resurgence is here. ?#?IDR.”

The title of the sequel was previously announced by director Roland Emmerich.

Emmerich also revealed why the star of the original film Will Smith is not coming back to do the second movie, “In the very beginning I wanted to work with him and he was excited to be in it but then after a while he was tired of sequels and he did another science fiction film, which was his father-son story, so he opted out. Now it’s a handover and we deal with the disappearance of Will Smith in a very respectful way, he is still part of this universe. It’s a handover from the old generation to the new,” he said.

He added that Hemsworth will play the newcomer in the film, Jake Morrison who drives a lunar forklift truck called “moon tug” while stepping up the Captain Hiller’s son Dylan is actor Jessie Usher.