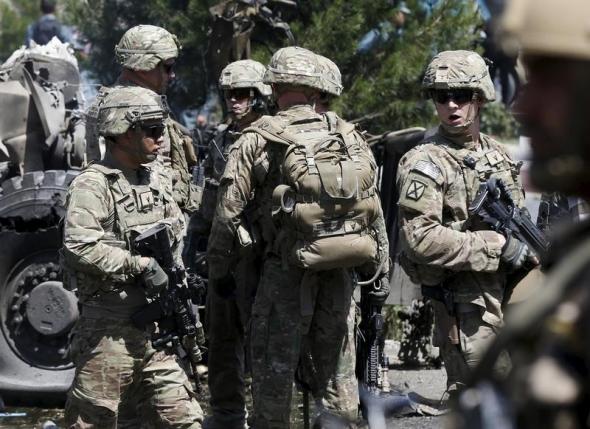 Reversing policy on Afghanistan, President Barack Obama announced on Thursday he will prolong the 14-year-old U.S. military engagement there, effectively handing off the task of pulling out troops to his successor.

Calling it a “modest but meaningful” adjustment to winding down the American presence inAfghanistan, Obama said the United States will maintain a force of 9,800 through most of 2016.

Obama had previously aimed to withdraw all but a small U.S.-embassy based force in the capital, Kabul, before he leaves office in January 2017. Under the new plan, troops will be drawn down to 5,500 starting sometime in 2017 and will be based at four locations – Kabul, Bagram, Jalalabad and Kandahar.

Afghanistan’s stability is vital to the United States and Afghan troops who are now in charge of security are not yet as strong as they need to be, Obama said, adding, “If they were to fail, it would endanger the security of us all.”

Asked by a reporter if he was disappointed in having to make the decision, Obama said he was not and added, “This isn’t the first time those adjustments have been made. This probably won’t be the last.”

“I suspect that we will continue to evaluate this going forward, as will the next president,” he said.

The U.S.-led coalition in Afghanistan ended its combat mission after 13 years of war at the end of 2014, and Afghan troops have since been in charge of the country’s security, with help from U.S. and NATO troops.

But Afghan forces have struggled in assaults from Taliban militants, who briefly took over the northern city of Kunduz. Obama acknowledged militants are still capable of launching deadly attacks on cities including Kabul.

U.S. troops will remain out of combat roles, training and advising Afghan forces, and ensuring that any al Qaeda remnants do not pose a threat to U.S. security, Obama said.

Obama, a Democrat, has faced steady criticism from Republicans on security issues as he has pursued a policy of winding down the wars in Iraq and Afghanistan that he inherited when he first took office in 2009.

Longtime critic John McCain, the Republican chairman of the Senate Armed Services Committee, said that while he was pleased by Thursday’s decision, he did not think the proposed rump body of U.S. 5,500 troops would be adequate for both counterterrorism missions and training and advising Afghan troops.

“It would have been far better to halt all further troop withdrawals and allow President Obama’s successor to determine what is warranted based on conditions on the ground,” he said in a statement.

Kevin McCarthy, Republican majority leader in the House of Representatives, also welcomed the delay, while cautioning against further troop withdrawals until the country is stable.

“This announcement demonstrates that President Obama doesn’t want to repeat his mistakes in Iraq by withdrawing prematurely and leaving a power vacuum open to extremists,” he said.

Obama’s foreign policy has become an issue among candidates running to succeed him in the November 2016 election.

Jeb Bush, one of a large array of Republican candidates, welcomed the move but said Obama should listen to his military commanders about further steps.

There was no word yet from Hillary Clinton, Obama’s former secretary of state and the front-runner in a smaller field vying to be the Democratic nominee in the election.

A bipartisan group of national security experts had urged Obama in a report this week to keep troops in Afghanistan.

Obama’s desire to withdraw from the country before leaving office was understandable but he made the right call by changing his mind, given developments on the ground, said one of the authors, James Cunningham. Cunningham was ambassador to the Afghanistan from 2012 to the end of 2014 and is now with the Atlantic Council think tank.

“The question has always been whether that’s a realistic goal, and whether it will create a dangerous situation if we actually do that,” he said in an interview.

U.S. military and administration officials have been discussing a slower withdrawal timetable since the March visit to the White House of Afghan President Ashraf Ghani and Chief Executive Abdullah Abdullah. Obama said he spoke to the leaders on Wednesday.

Ghani has been more supportive of the U.S. presence than his predecessor, Hamid Karzai, who left office last year. Obama stressed that he viewed Washington as having a solid partner in the Afghan president.

Keeping 5,500 troops at four locations will cost about $14.6 billion per year, up from the estimated cost of $10 billion to keep a consolidated force at the Kabul embassy, officials said.

Obama said he would work with NATO allies, who also have indicated some interest in sustaining their presence. There are more than 6,000 non-U.S. forces in Afghanistan as part of the “Resolute Support” mission.

Obama’s predecessor, George W. Bush, sent a U.S.-led force into Afghanistan soon after the Sept. 11, 2001, attacks on the United States, aiming to destroy al Qaeda and to oust the then-ruling Taliban that had sheltered the militant group.

The foreign ministry of Russia, which has memories of the nearly 10-year Soviet war inAfghanistan in the 1980s, said on Thursday it doubted the U.S. decision would ease the situation in the country, RIA news agency reported. Washington has been critical of Russia’s move to engage militarily to support Syrian President Bashar al-Assad in that country’s four-year civil war.