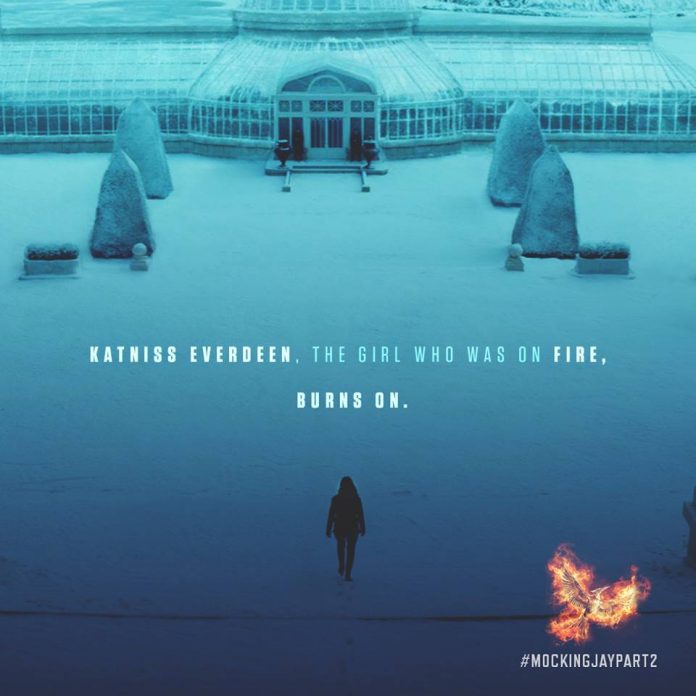 “Hunger Games Mockingjay Part 2” begins its countdown for the film’s release on November 20 but one of its promotional posters has received some mixed comments when it unintentionally includes an expletive.

The image shows lead character Katniss Everdeen’s face painted with a red Mockingjay symbol and words that reads, “100 days until the Hunger Games: Mockingjay Part 2.” The placing of the message inadvertently produces the word “c*nt” which some Twitter users found more funny rather than offensive. The poster was taken down immediately.

Talking to Entertainment Weekly, he said that fans can expect a close-up look at the Capitol, “This is the most amount of time we’ve spent in the Capitol. So we had to focus a lot on how to accomplish that, especially when we spend most of our time out on the street.”

He also mentioned that while they are creating the blue-print of the city to be shown in a hologram version during the movie, they drew inspiration from the layout of Paris and designs of Germania. While production designer Philip Messina mentioned that the buildings were modeled on the architecture of the Soviet era where dictatorial regime was prevalent.

“It felt strong and monolithic, but had a decorative element to it. It adds an artful quality to it, which I felt I hadn’t seen on film before,” Messina explained.

He also shared that finding an appropriate location has taken him to Berlin, Germany where they found a Russian-built military base he describes as “a find of a lifetime,” “We tore up the road, put holes in the buildings, and made it look like fires had broken out. We were lucky enough to do whatever we wanted there,” he continued.

The Hunger Games: Mockingjay Part 2 concludes the story of Jennifer Lawrence as Katniss, Josh Hutcherson as Peeta Mellark and Liam Hemsworth as Gale Hawthorne as they take on the Capitol run by President Snow, portrayed by Donald Sutherland.