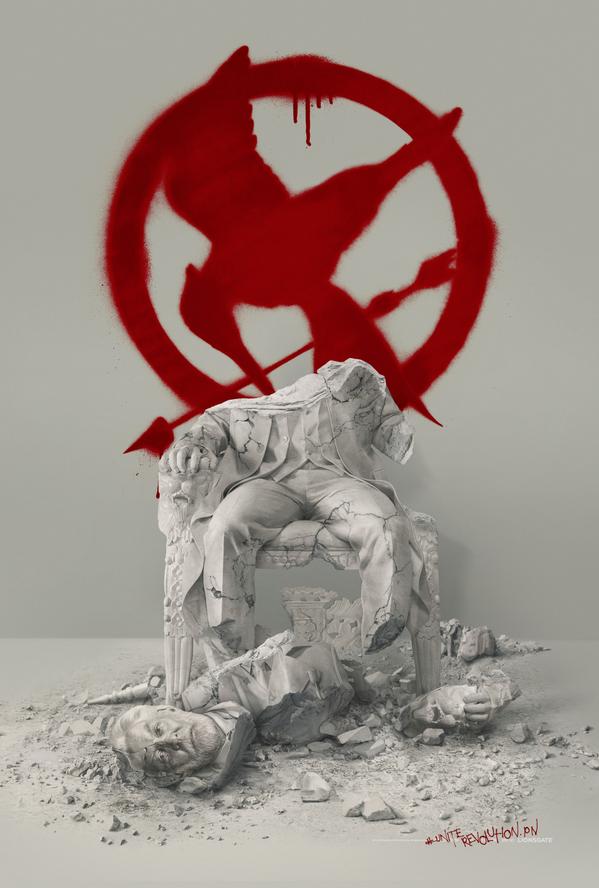 In a series of posts on its official Twitter account, Lionsgate’s “Hunger Games: Mockingjay Part 2,” released a new look at the movie’s promotional poster last week.

The photo shows what seems like a stone statue of President Snow with its head fallen and crumbling on the floor. Behind the statue on a completely white backdrop is a Mockingjay spray painted in red as a symbol by the revolution. In the corner are the words “#Unite” and “Revolution.PN”

Time notes that Revolution.PN directs to the URL of the movie’s official website which invites fans to register online and get updates. It shows the words which reads, “Dawn is approaching. A new day is on the horizon. Be part of the next generation of Panem. Enlist today.”

While over to the other website, TheCapitol.PN, reveals the first poster released last year, which is an untouched statue of President Snow sitting on what appears to be a throne, flanked on both sides by Peeta Mellark and Johanna Mason. Fans can watch on the site how it will be then transformed to the beheaded statue accompanied by the words, “The Capitol must fall so we may be free,” the report shared.

The movie’s first teaser trailer was also revealed showing the protagonist Katniss Everdeen together with Panem rebels in an all-out war against the Capitol. The video also portrayed the wedding of Finnick and Annie and what might be a normal Peeta, as he was last seen to be hijacked through mind-control during part one of the movie.