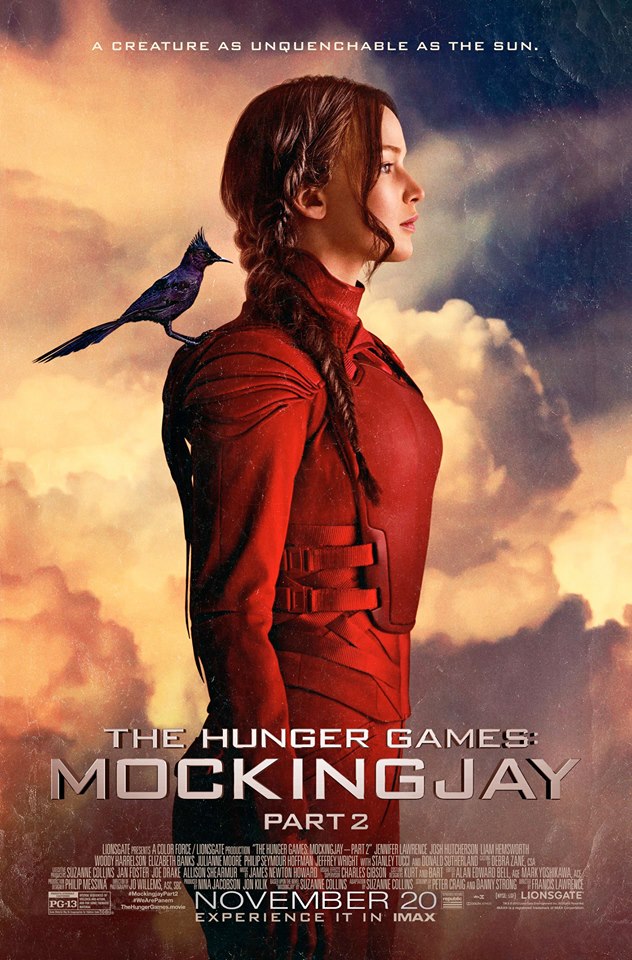 The rebellion continues as people carry on to fight the authoritarian government of President Snow (Donald Sutherland). However, part two of Mockingjay may be a bittersweet battle, as fans may see the death of one of its characters.

Jennifer Lawrence posted on her Facebook page a new poster for Hunger Games: Mockingjay part two where she is seen clad in a red suit, with a mocking jay on her shoulder, and a determined look. Above the poster reads “A Creature as Unquenchable as the Sun” perhaps describing the flame of revenge burning inside her and the people.

Lionsgate released a trailer which centers on snippets of Katniss Everdeen (Jennifer Lawrence) and her sister Primrose (Willow Shields) from different parts of the movie. It shows preview of where the story starts as Katniss took the place of her sister to represent their district. It also showed  the conversation between Katniss and President Snow, where the heroine said, “I never asked for this, I just wanted to save my sister and keep Peeta alive” to which Snow replied “It’s the things we love the most that destroy us.”

With all the drama and tear-jerking moments in the trailer that are especially centered on the sisterly love, Games Radar theorizes it actually gave away the major plot of the movie. The trailer, which seems like a tribute for Prim, could be spelling out her fate, especially with the text, “This November, her sacrifice is the ultimate tribute.” However, this could also imply the death of the heroine herself, as she holds the main role in giving hope to the people, and that “her” sacrifice may be the one to put the battle to an end.

Hunger Games: Mockingjay part two hits the big screen on November 20, with the United Kingdom getting it a day earlier on November 19. Tickets can be purchased starting October 1, 12PM ET.

Mockingjay part two is the story ender of the massively popular film franchise adapted from the Hunger Games trilogy novel of Suzanne Collins.

Homeland season 5 spoilers: first look of Frannie as a toddler;...