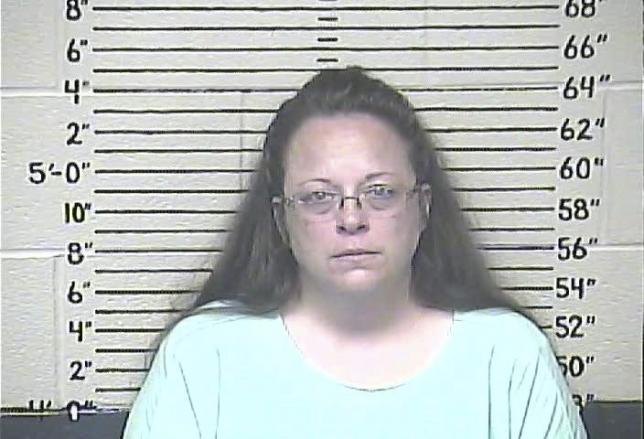 Up to 500 supporters gathered outside a Kentucky jail on Saturday to support a county clerk held there for defying a federal judge’s order to issue marriage licenses to same-sex couples.

Rowan County Clerk Kim Davis, 49, who refused the licenses due to her Christian belief that marriage can only be between a man and a woman, said she was prepared to remain in jail where she has been reading a Bible since her incarceration for contempt on Thursday, her lawyers said.

On Saturday, a white banner spray-painted with the black letters “Kim Davis POW” was placed near the entrance of the jail in Grayson, Kentucky, and a bagpipe and drum corps played “You’re a Grand Old Flag” and marched to a field across from the jail.

“God is going to continue to bless Kim Davis,” the mayor of Grayson George Steele told those gathered before leading the group in prayer for the program, which ran a little over an hour.

Davis’s husband, Joe Davis, cracked with emotion and thanked supporters. Her pastor, Daniel Carter, said the clerk was grateful for their support.

Elizabeth Johnston, 40, traveled with her nine children 140 miles (225 km) from Zanesville, Ohio, on Thursday to the federal courthouse in Ashland, Kentucky to support Davis.

“When they put her in jail, we said, ‘We’re not leaving,'” said Johnston, who sang on stage with two of her children and joined the bagpipe and drum group to play “not God Bless America, but God Save America,” she told the crowd.

In Davis’s absence, on Friday, deputy clerks issued marriage licenses to at least four same-sex couples at the offices in Morehead, Kentucky, where rival groups of demonstrators supporting Davis and the applicants protested outside.

Davis’ lawyers have said they plan to appeal U.S. District Judge David Bunning’s contempt order, which has no expiration date.

Bunning had ordered Davis in August to issue the licenses. Her request for a stay of his order was denied by a U.S. appeals court and by the U.S. Supreme Court.

Mat Staver, founder of Liberty Counsel, which represents Davis, said he believes the licenses issued on Friday are invalid because they lack her approval. He said Davis had no intention of resigning as clerk or acting against her beliefs.

Davis, a member of the Apostolic Christian Church which follows a literal interpretation of the Bible, has refused to issue any marriage licenses since the U.S. Supreme Court in June made gay marriage legal across the United States.

Carter County Jailer R. W. Boggs, an elected office in Kentucky, said on Saturday he has met with Davis at the detention center, describing her as comfortable.

“She’s said she’s slept well and appreciates the treatment that she’s getting,” Boggs said. “We’re good to everybody.”

Boggs said the jail would take precautions to ensure that other rallies expected outside also run smoothly.

Her jailing has come to symbolize the cultural gap over gay marriage in the United States. The fight over marriage licenses for same-sex couples may not end in Kentucky. A number of judges and clerks in Texas, Alabama and elsewhere have thrown up roadblocks to same-sex marriage.

Emotions have run high on all sides. Davis, and an attorney for one of the four couples said they had received death threats. The judge also reportedly has received a death threat.