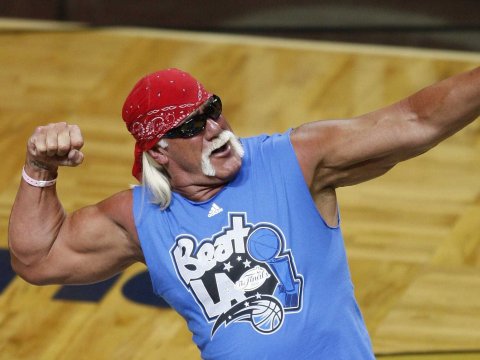 Wrestling’s most iconic figure, Hulk Hogan has been terminated by the WWE for using the N-word while ranting against his daughter Brooke Hogan’s taste in men in an unauthorized sex tape recorded in 2008.

The transcript of the sex tape was reportedly released by Radar Online and The Enquirer wherein Hogan complained to his then lover Heather Clem about how his daughter Brooke flipped sides on him and was siding with a “black billionaire” after he invested millions in her music career, a NY Daily News article reported.

Hogan reportedly used foul language against her daughter’s boyfriend at the time, believed to be Miami rapper Yannique Barker, also known YNIQ, who is also the son of music mogul Cecile B. Barker.

In a statement, the WWE announced their decision to terminate their engagement with the wrestling Hall of Famer.
“WWE terminated its contract with Terry Bollea (aka Hulk Hogan). WWE is committed to embracing and celebrating individuals from all backgrounds as demonstrated by the diversity of our employees, performers and fans worldwide.”

In his own statement, Hogan owned up to his mistakes and apologized for his actions.

“It was unacceptable for me to have used that offensive language. There is no excuse for it, and I apologize for having done it,” he said.

Another wrestling superstar Dwayne Johnson aka The Rock meanwhile, expressed disappointment over the Hulk’s unfortunate choice of words but said that he has not known him to be a racist in all the years they have been friends. He however, said that what is happening is a consequence of his actions.

“I’ve known Terry for a lot of years. And my dad helped train him in Florida in the ’70s, with my uncles. So I had not known the man to be racist. It’s funny, it’s one of those things where and not justifying what he said we’ve all talked trash, especially in private,” he said to The Wrap.

Another friend and former tag team partner Dennis Rodman also defended the Hulkster from bashers and maintained that Hogan is not a racist, reported NY Daily News.

“I’ve known @HulkHogan for 25 years. There isn’t a racist bone in that mans body,” he tweeted. He also called on his friends Scottie Pippen, Magic Johnson, Shaquille O’Neal and Mike Tyson to support Hogan to prove that he is not a racist.

“Well @HulkHogan don’t feel alone I was erased frm the @UFC.No 1can take away our #Legacy. We all make mistakes An apology should b accepted,” he tweeted. “@HulkHogan is a real America & far from a racist.Trying 2smear his name is embarrassing.We stand behind U #HulkHogan“