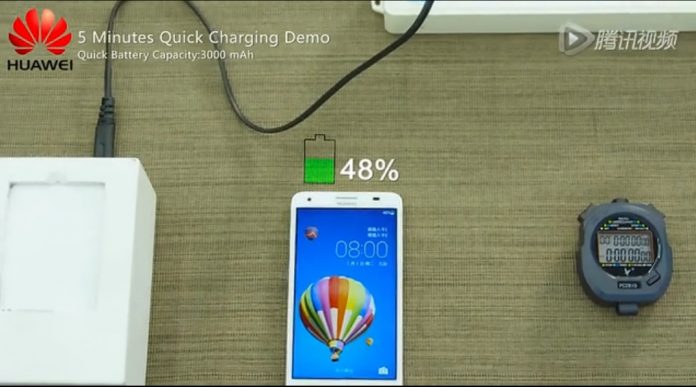 Huawei has revealed two prototypes of its latest batteries in Japan last week. The new lithium-ion batteries charge to about 50 percent in a few minutes.

The Chinese company demonstrated its quick-charging lithium-ion batteries at the 56th Battery Symposium in Japan. This video presentation shows how its 3000 mAh battery went from 0 percent to 48 percent in just five minutes. This allows for 10 hours of talk time, according to Huawei. The other battery prototype, a 600 mAh unit, charged to 68 percent in two minutes.

In a post in its site, Huawei explained how the batteries were able to charge faster: “The company bonded heteroatoms to the molecule of graphite in anode, which could be a catalyst for the capture and transmission of lithium through carbon bonds … The heteroatoms increase the charging speed of batteries without decreasing energy density or battery life.”

Simply put, this means Huawei changed the chemistry of its batteries by using heteroatoms, atoms that are not carbon or hydrogen, which increased charging speeds without affecting the battery’s overall lifespan, explains BBC.

Huawei is confident the new batteries would help revolutionize the way people use their electronic devices. The company aims to create batteries that would charge to full power in the time it takes to grab a coffee.

This recent development has kept lithium-ion batteries attractive and has complicated the argument for wireless charging, according to ZDNet. Different companies seem to be taking their own direction when it comes to batteries. While Samsung has been pushing for fast wireless charging as a key feature of its phones and even partnering with Ikea for its range of wireless furniture, Google decided to drop its support for Qi wireless charging for the Nexus 5X and Nexus 6P. Google’s Nexus team explained in a Reddit “Ask Me Antyhing” that there are more reasons for them to opt out of than stay with wireless, including ease of plugging in, fast charging, and optimizing for thinness.