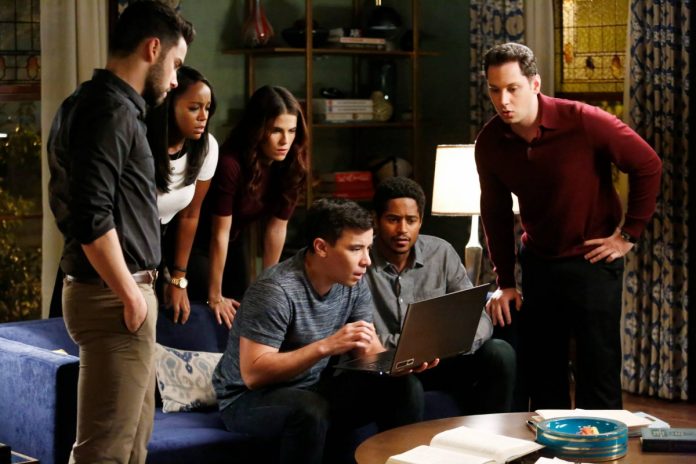 The finale of ABC’s legal thriller drama “How to Get Away with Murder” season 2 is almost here, with heart thumping moments that will have the characters getting closer to more truths with some of their secrets revealed.

Titled “Anna Mae,” the concluding plot will have Annalise Keating (Viola Davis) running home to her mother amidst all the chaos that surrounding them. Creator Pete Nowalk teased some parts of the script showing Bonnie (Liza Weil) telling Laurel (Karla Souza) and Frank (Charlie Weber) that with Oliver’s (Conrad Ricamora) help, they found her in Memphis.

Meanwhile, a teaser shows Wes (Alfred Enoch) talking to Laurel about his recent confrontation with Annalise regarding his mother and father.

He shared that the lawyer was just protecting her, “Or that’s what she says, according to her Wallace Mahoney is my father… she’s probably lying, again.” When he laid out his plans of going to New York to find out if it is true, “How? By going there and asking him? Your dad has nothing to do with who you are,” Laurel replied. They shared what could be a tender moment before Frank suddenly barges in to the room.

Nowalk hinted in an interview with TV Guide that Wes is torn between believing Annalise’s words and who to ask for the real details, he said that it will be “very surprising” to see what happens.

He also shared that they will answer some of the fans’ burning questions about what Frank owes to Sam that he had to kill Lila for him and if the car accident is indeed an accident or arranged by Wallace.

Frank will also do something about his current situation, “Frank’s worst fear come to life. He was hoping the secret would just lie there. This is the hugest pickle he’s been in in his life. He has a lot of decisions to make or not make… I don’t think he’s rash. think he’s learned from Annalise to play the game of chess, so I think he’s going to weigh all the consequences. He’ll do something,” he added.

Season finale of “How to Get Away with Murder” airs on Thursday, March 17 at 10pm EDT.

'The Elder Scrolls 6' release date is still a long way...

'The Vampire Diaries' season 8 spoilers: Alaric may have a new...