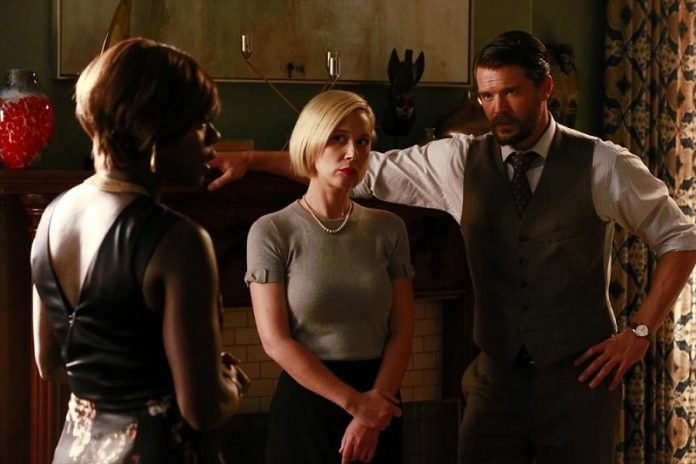 About two weeks ago, Liza Weil discussed Bonnie’s ongoing struggle in terms of allegiances, having to choose between Annalise (Viola Davis) and Frank (Charlie Webber). As it turns out, despite standing by the law professor’s side, her association with Frank is more complicated that what was initially perceived as revealed by last week’s episode. In a brand-new “How to Get Away with Murder,” Bonnie will face the repercussions of her actions as she tries to spin a tale in order to save her spot beside Annalise.

Just when the Shonda Rhimes-produced thriller was getting into the thick of things regarding the fire that caused the death of one Annalise’s own, the narrative quickly spun dropping a bomb in the form of Bonnie and Frank’s steamy rendezvous.

Traveling to Coalport to supposedly pick up her dad’s remains, Bonnie hooked up with Frank with a glimmer of hope in her that things will eventually get back to normal. Unfortunately, after their frolicking, Bonnie woke up devastated to learn that her apparent lover fled while she was sleeping.

Things are going to get worse for Bonnie in the upcoming episode titled “Is Someone Really Dead” with a confrontation with Annalise on the horizon after Laurel (Karla Souza) tipped the latter of the former’s previous whereabouts.

“We’re going to see how Annalise reacts to Bonnie seeing Frank in Coalport and how Bonnie is going to spin that,” Weil teased in a recent discussion with Entertainment Weekly. “It’s certainly a massive betrayal. There’s also a really interesting element going on in that Annalise, Bonnie, and Frank are all people that are expecting betrayal; it’s how they’re built. Bonnie is not entirely surprised that Laurel comes clean with Annalise history would show that she almost has a compulsion to do what she thinks is right.”

Moving forward, the bombshell that is Frank and Bonnie’s relationship turns out to be just the tip of the iceberg as executive producer Pete Nowalk hinted of a long-standing tryst between the two.

“What’s interesting about when you watch episode 5 is they have a whole secret history between the two of them that we’re only starting to uncover it a little bit,” the showrunner said. “Yes, they sleep together, but I don’t know if that was the first time.”

Elsewhere in the episode, the Wallace Mahoney (Adam Arkin) murder sees a new development which will have an impact on Annalise and the rest of the Keating 5.

“How to Get Away with Murder” season 3 airs every Thursday at 10 p.m. ET on ABC.