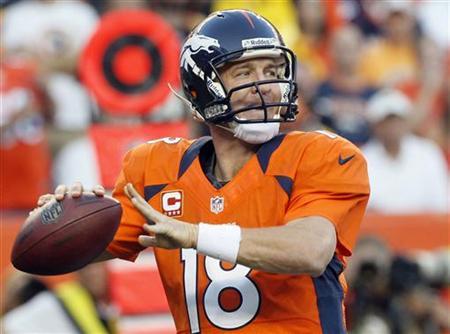 National Football League’s Denver Broncos and Houston Texans have been under a lot of buzz recently when some insiders claimed that Peyton Manning might be traded for Brock Osweiler.

Denver radio host Benjamin Allbright of 94.1 FM Denver took the news to Twitter and revealed on his many posts that, “#Broncos attempted to trade Peyton Manning this off-season to the Houston #Texans per more than one source in position to know. Certain elements of Broncos organization wanted Osweiler era to begin this season.”

He did not have any official comment from either team but according to him the information came from two unrelated sources, suggesting that it “would be a hilariously oddly coordinated lie, if what they were telling me was untrue.”

Moreover, according to a previous report by Profootball Talk, a source told them that Manning’s contract has a no-trade clause that only applies for 2015. Even though the player reportedly does not like change, he can possibly be traded for 2016.

However, Mike Klis who covers Broncos news for 9News disputed the report and said that Manning is not going anywhere. He added that Manning’s agent Tom Condon would have to be involved if there is a negotiation to seal the deal but Condon reportedly said on his interview that “I’ve never spoken to Denver or Houston regarding a PM trade.”

In addition, NFL Media Insider Ian Rapport mentioned on “Rich Elsen Show” that the alleged talk trade between the teams was “not how it went down.” He added that “Texans… reached out to teams and tried to see what was there.” Teams are said to casually converse with each other during offseason to “perform due diligence” before a new league year starts, NFL reports.

To maybe put an end to all the rumors, Denver Broncos vice president of public relations Patrick Smyth also commented on Allbright post saying “Here’s one for the record – The speculation is false, and your report is inaccurate.”