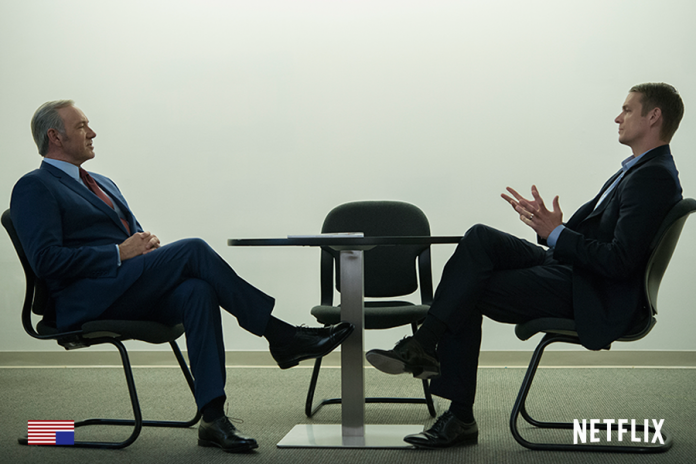 Among the numerous threats to Frank Underwood’s (Kevin Spacey) hold of power, only one person will be on the official sheet when “House of Cards” come back for its fifth season Will Conway (Joel Kinnaman).

Despite only being introduced last season, Will has rapidly become one of the few formidable opponents to the current president of the United States. The New York governor taking a shot at the White House has posed as a major challenge for Frank. He is charming and very adept to the current times with his constant exploration of technology and social media. However, Kinnaman shares that at the bottom of his character’s persona is the hidden core of ruthlessness and no-nonsense attitude much like Frank’s.

“They seem very different, Will and Frank, but then when it gets down to it, they’re two very similar animals. They just kind of went at it,” Kinnaman told Yahoo TV in a recent sit down interview as part of the outlet’s Emmy season roundup.

Aside from their similarities, in terms of political and personal will, Frank and Will also share a penchant for strong women. Their respective wives, Claire (Robin Wright) and Hannah (Dominique McElligott) are also very much involved in their quest for power. But while Claire has already slowly unsheathed her claws in the past four seasons of the show, Hannah has yet to show what she is capable of for the sake of keeping his husband’s dreams alive.

Regardless of where the upcoming chapter of “House of Cards” will bring Will and his family, Kinnaman promises that what fans have seen so far in his character is just barely his outer layer.

“I think we just scratched the surface, and that’s how the character was pitched to me that it was a character that had many different layers and then while we were shooting it, I really felt like they came through on those promises. I’m really, really looking forward to going back for another run at it,” he said.

With Will determined to win the impending national elections and Claire, as well as Doug (Michael Kelly), potentially turning the tables on him, Frank is treading on shaky grounds more than ever.

No specific roll out date for “House of Cards” season 5, but fans can expect it to be available to stream on Netflix by March 2017.