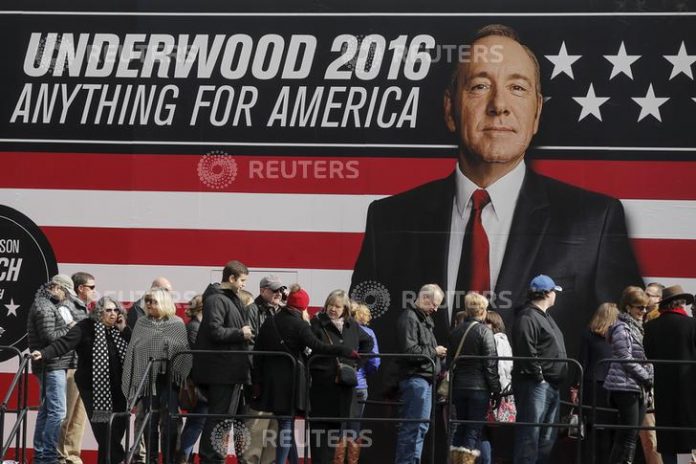 Season 4 of the Netflix show “House of Crads” already reached is finale last March and before season 5 starts, cast member Robin Wright asked the management to be paid the same amount that fellow co-star Kevin Spacey is receiving. She even threatened the studio bosses that she would go public if the management did not heed her demand.

Netflix executives gave in to Wright’s demands. The actress shared this while delivering a speech campaigning to stop robbing Congo’s natural resources at the Rockefeller Center in New York. She even said that it’s a perfect paradigm because there are only a few shows on television wherein the female and male leads are equal. She added that her character is equal to Spacey’s and was even more popular to fans for some time. She used this as leverage to request for an equal pay.

In addition, Netflix has announced that the show’s creator, Beau Willimon will no longer be part of the development of season 5 and added that he was grateful to Netflix, the staff and the stars that he has worked with.

Season four ended with Frank Underwood (Spacey) trying to ward off his opponent for presidency, Will Conway (Joel Kinnaman). On the other hand, Claire Underwood (Wright) is trying to secure the vice presidency spot. However, Tom Hammerschmidt (Boris McGiver) is speculated to drop the bomb against the Underwoods. This includes Claire’s affair with Thomas Yates (Paul Sparks).

On the other hand, Leanne Harvey (Neve Campbell) and Doug Stamper (Michael Kelly) will be having interesting roles to play in the coming season. Speculations revealed that they will be moving out of the Underwood’s care and strive to make a name for themselves for them to have power of their own.

Guardians of the Galaxy 2 news: Snapchat post teases Kraglin in...