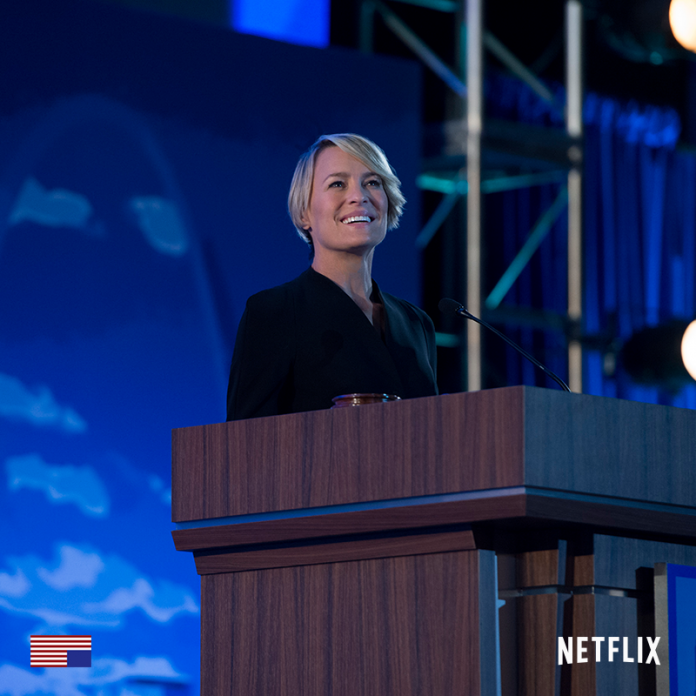 For the fifth season of “House of Cards,” there are rumors that Frank Underwood’s (Kevin Spacey) rule as president may end by his own first lady, Claire Underwood (Robin Wright).

There are speculations that Frank may be betrayed by one of his most trusted men, Doug Stamper (Michael Kelly). It is said that the Doug may actually be the one to execute the president and the person that may be behind this scheme is Frank’s own wife, Claire.

In the previous season, there was an attempt on Frank’s life. Fortunately, the assassination was avoided, but there may be a possibility that it will happen again in season 5 of “House of Cards.” It is said that Doug’s relationship with Leann Harvey (Neve Campbell) will be integral to the downfall of the president. Doug’s loyalty may also be shaken by Leann, in order to further her own plot in bringing down Frank.

There are also predictions that Claire will be behind it all, and she will be the one to manipulate the couple in achieving her ambitions. The first lady has already begun her political ascent after being elected vice president.

Her intentions of hurting her own husband may be rooted in how she did not like the way she was treated by Frank. Claire could have a new goal in her mind, which is to take on the presidency, and the only way to do that is for her to take Frank out of the equation.

Claire has also learned to become manipulative through her husband and has been successful in applying it to her actions. One example was taking advantage of her mother’s predicament in order to gain votes from people.

In other news, it is rumored that Sigourney Weaver may be added to the cast for the next season. She will also oppose Frank.

It is speculated that the season 5 of “House of Cards” will be released on Netflix in 2017.