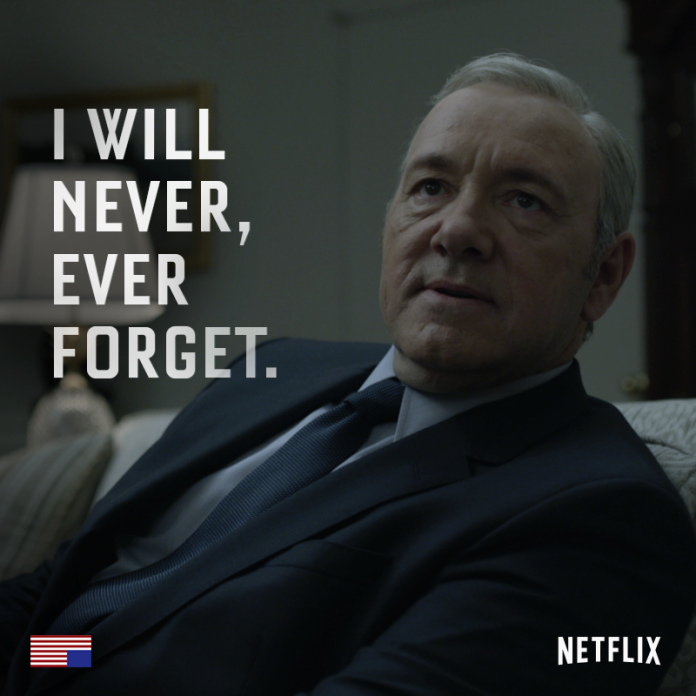 Season 5 of Netflix’s critically acclaimed political drama series “House of Cards” has been announced even before the latest fourth season was released this March on the streaming giant service. Fans who have already binge-watched the new installments are said to be suggesting what may come next in the narrative,

Reports claim that the plot will pick up from the cliffhanger finale, which will unveil the fate of Frank Underwood’s (Kevin Spacey) political career. Moreover, the result of the presidential election will be revealed at about halfway in the upcoming season. Viewers have seen that the storyline of season 4 has stretched during the campaign period and to the election, but the final decision from the people has yet to be made.

Two possible scenarios are predicted to transpire in future episodes – either Underwood will be in the White House if he wins leading to another season or he will lose, which may mark the end of the series.

It is also interesting to see if he will recover from the liver damage he sustained and if his intensifying feud with Claire Underwood (Robin Wright) will be rectified. The husband and wife continue with their broken marriage as they run side-by-side as president and vice president, each with their own motives.

Aside from the lead stars, Neve Campbell who portrays Leann Harvey, Michael Kelly as Doug Stamper, Joel Kinnaman as Will Conway and Paul Sparks as Yates are also expected to return.

When it comes to the possible premiere date, it is expected to come out in the same month in 2017 following the schedule of previous releases. However, it remains to be seen if this comes to fruition.

Show creator Beau Willimon announced back in January that he will be exiting the franchise to work on other projects. Taking over his place are co-showrunners Melissa James Gibson and Frank Pugliese who worked in the series as seniors writers since 2014.