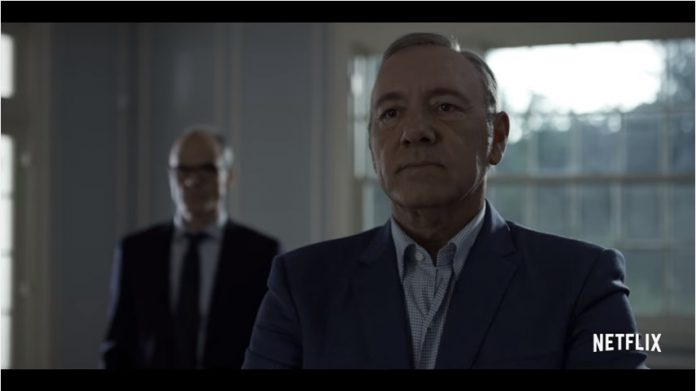 Since streaming website Netflix dished out season 4 of the political drama “House of Cards,” many have been guessing what will happen next season after Frank Underwood (Kevin Spacey) and his wife Claire (Robin Wright) made a very risky decision by putting America in a state of war after a hostage negotiation gone wrong.

Going back to the show’s season 4 finale, the latter scenes featured an American family being abducted by followers of the Muslim extremist known as the Islamic Caliphate Organization (ICO). The incident spread like wildfire across the nation as the people behind the abduction made a deal to speak with New York Republican Governor Will Conway (Joel Kinnaman) who was also vying for the presidency.

Frank, on the other hand, seeing an opportunity to play the hero, invited Will together with his family to the White House to continue the talks between them and the abductors. Will somewhat prolonged the discussions with the extremists in order for him to locate their whereabouts. However, Frank and Will got into a heated argument that resulted in the latter terminating his part as chief negotiator and left the White House with his family. This left Frank and Claire in a very tight situation and it came to a point that the two even allowed the extremists to talk to the former head of the ICO after releasing a couple of hostages. Nonetheless, the worst case scenario happened as the ex-leader of the ICO ordered the kidnappers to finish off the remaining victims that will be shown on live TV.

Hence, Claire suggested Frank to deal with the situation using brute force by declaring war against the abductors and the ICO and at the same time, putting the nation under a state of war.

That being said, the rumor mill has been spinning and it has been suggested that Claire might be the next president and Frank might be killed off next season. In addition, journalist Tom Hammerschmidt (Boris McGiver) might finally drop his expos about the Underwood’s darkest secrets one of which is Claire’s hidden romance with Thomas Yates (Paul Sparks).

Meanwhile, Claire’s campaign manager, Leann Harvey (Neve Campbell), and Frank’s chief of staff, Doug Stamper (Michael Kelly), might be capitalizing on the situation that the Underwoods are in and eventually earn a higher position in the government.

Season 5 of “House of Cards” is speculated to be released next year.

'Guardians of the Galaxy 2' release news: movie coming to San...