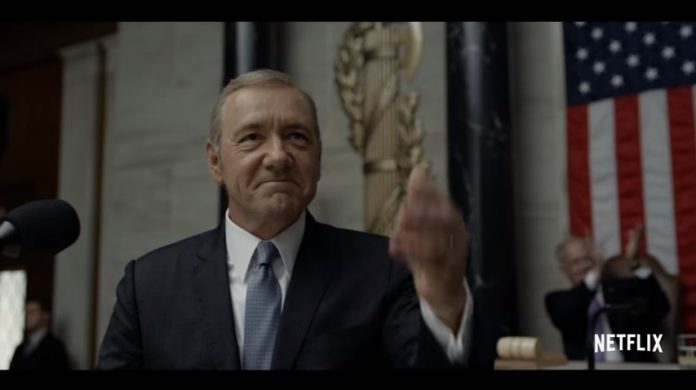 Season 5 of the Netflix original series “House of Cards” builds up to be more chaotic than the previous season after a negotiation that didn’t go as planned and a declaration of war courtesy of no other than President Frank Underwood (Kevin Spacey) himself.

Fans can still remember during last season’s final episode that a family was forcefully taken by supporters of the Islamic Caliphate Organization (ICO). The kidnappers then agreed to talk exclusively to Will Conway (Joel Kinnaman) who during that time was the governor of New York and at the same time running for the highest government position in the land.

Meanwhile, Frank capitalized on the situation and invited Will and his family to the White House to continue the negotiations with the extremists. Will took the said invitation as an opportunity to buy some time for him to finally track down the location of the abductors. Nonetheless, things didn’t go well between Frank and Will leaving the latter with no choice but to walk away from negotiations altogether, leaving Frank and his wife Claire (Robin Wright) with the burden of freeing the remaining hostages.

The two followers of the ICO then requested to talk with the extremist group’s deposed leader which was one of the worst decisions that Frank and Claire did. After the abductors spoke with the former terrorist leader, the latter ordered the kidnappers execute the remaining hostages which resulted in Frank’s declaration of war with the ICO and putting America in a state of war.

As previously reported, next season may feature Claire rising to power and could become the next president. Meanwhile, Frank may not see the light of day next season as he is speculated to be assassinated.

Moreover, media personnel Tom Hammerschmidt (Boris McGiver) might finally reveal to the nation and even to the world about Claire’s well-kept affair with Thomas Yates (Paul Sparks).

There’s no exact airdate yet for the show’s fifth season. However, it’s speculated to be ready for streaming in 2017.