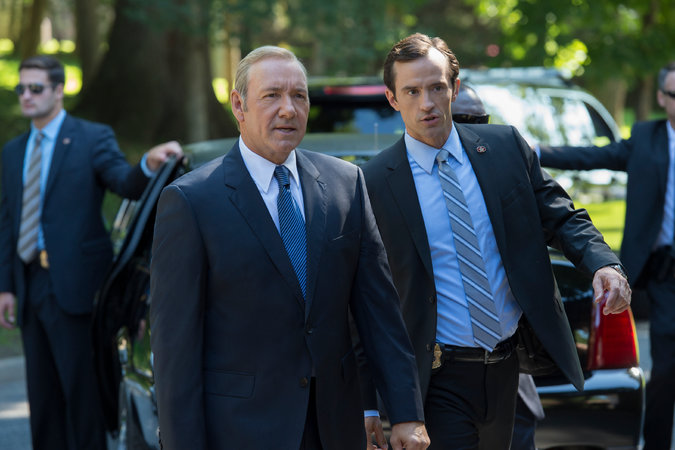 “House of Cards” is up for another serving next year and with President Frank Underwood (Kevin Spacey) trapped on his hospital bed, other players in the show would have to step up to keep the story moving.

As previously reported, the possibility of Claire (Robin Wright) taking over for her husband while he is in no condition to run the country is like opening a flood gate of possibilities for the show’s direction. Fans of the show know that the couple is not in best terms right now and if Claire decides to cross her husband, it may be an interesting conflict given that arguably she is the only one who can put up a decent fight against the male Underwood.

The Hollywood Reporter reported that if the upcoming season of the political drama shall be its last, all odds will be in Claire’s side as she has secured her seat as the vice president and now more than ever has a very close shot at the seat in the Oval Office. If she risks it and goes up against Frank, she will need a long term plan to eventually eliminate him as the current president is not keen on power sharing. However, if her plan fails, she has to prepare for an airtight defense as Frank will be ruthless in trying to take her down.

On the other hand, shall new showrunners Frank Pugliese and Melissa James Gibson take on a different route and keep Frank longer in the hospital, the show can utilize a series of flashbacks to keep his story moving. Not only will it give more depth into Frank’s story, but it will also allow them to bring back a series favorite in Meechum.

“I would suppose that it is possible,” Nathan Darrow teased about a potential Meechum cameo at some point in the show’s future as he sat down for an interview with Bustle. “I mean, if the writers find that’s something that’s useful to telling some other bit of a story or if they feel like it’s going to be interesting to the audience, then I’m sure they could. That’s the great thing about storytelling like this, this kind of open-ended series content.”

“If we flashed back to something that the audience hadn’t seen from like some years ago, I think that’d be great, of course. It’s interesting,” he suggested.