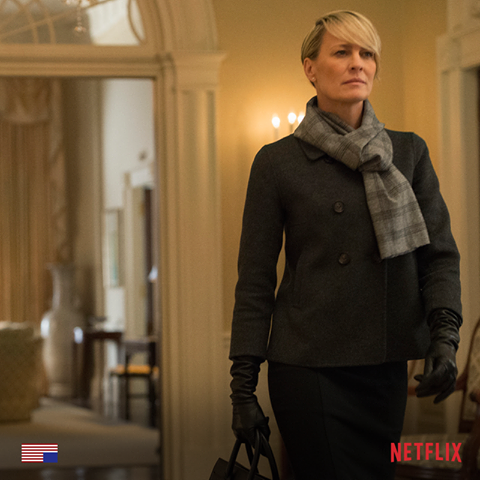 Netflix original political-drama series “House of Cards” release date has yet to be announced but some fans speculate that it will hit the online streaming giant sometime during the first quarter of next year.

According to Netflix Life, based on previous releases of the first three seasons which happened on February 1, 2013, February 14, 2014 and February 27, 2015 respectively, it seems like the new season will also arrive during the same month with the report predicting the date to be the 26th.

Although not definitive, it also debunked the rumors that the show may be pushed back to fall 2016 to coincide with the presidential election of the United States.

Some viewers took to the show’s official Facebook page to suggest that Kevin Spacey and Robin Wright may return to the small screen as early as January or later in March.

When it comes to the plot, rumors have it that power couple Frank and Claire Underwood may adopt a child to improve their image for the elections.

With season three showing Claire walking away from Frank, reports claim that she may run against him and that there is a big chance that her husband loses, “What she really is troubled by is that they both have been lying to themselves, and thinking that they were equal partners. When in reality, there was only one chair there in the Oval Office,” series creator Beau Willimon previously teased.

If it turns out that he is not re-elected, it remains to be seen if the position will be under his wife or be transferred to the power of a younger couple supposed to be added as series regular.

As previously reported, Colm Feore and Neve Campbell have been cast in undisclosed roles that are said to have a high-profile standing in the White House.

Angry Birds 2 to be available in app stores on July...