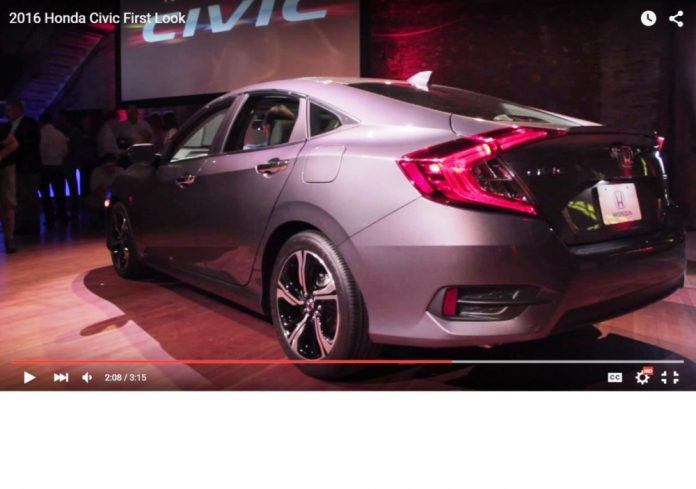 It’s still a month before the new Honda Civic makes an appearance at the Los Angeles Auto Show but a video has emerged that gives a detailed review and walk around of the new 2016 Honda Civic.

According to World Car Fans, the video was uploaded by a user in the CivicX forums. The video is reportedly a review of a pre-production 10th generation Honda Civic sedan in Touring trim.

World Car Fans said that, as seen in the video, the 10th generation appears to have features that are upgrades from the ones that are in the 9th generation Civic. These include a fully digital instrument panel that should make it easier for drivers to digest information at a glance. The 2016 Honda Civic will also have a bigger touchscreen display for its infotainment system.

The Christian Post added that the new 7-inch touchscreen infotainment system is reportedly compatible with Apple CarPlay and Android Auto.

Auto Evolution noted that the 2016 Honda Civic will feature an impressive array of electronic features, including lane departure assist and a rearview camera that will make parking a lot safer and easier even for new drivers.

The new Honda Civic in the video also featured a sunroof, leather for its interior upholstery and heating systems for the car’s rear seats and was powered by a brand new 1.5-liter petrol turbo unit that outputs 173 horsepower, Auto Evolution said.

For the interior, they can choose from black, ivory, and gray, CP reported.

The 2016 Honda Civic is expected to appear at the Los Angeles Auto Show, which begins on November 20.