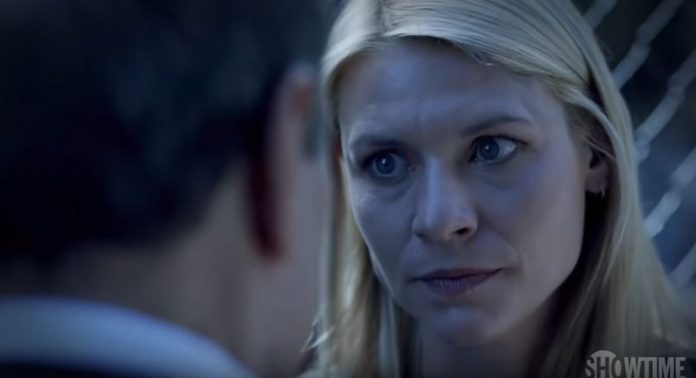 Ahead of the season 6 premiere of “Homeland,” Showtime released the first official trailer for the new season, which sees Claire Danes’ Carrie Mathison back in New York City after everything she went through in Berlin last season.

Set to a cover of Phil Collins’ “In the Air Tonight,” the trailer features Carrie kissing her daughter’s forehead while supporting characters Saul Berenson (Mandy Patinkin) and Dar Adal (F. Murray Abraham) are also seen in the clip. There are snippets of everyone’s lives in New York, and later, a few armed members of the FBI burst through the door of an African-American woman’s home and order the people inside to get down on the ground.

Later, Dar tells Saul that Carrie is a menace and that getting her involved would be a huge embarrassment for everyone. Dar has a confrontation with Carrie and he orders her to stand down.

“No, you stand down,” Carrie fires back.

“I don’t think you understand how vulnerable you are,” he says.

Season 6 moves the action from Europe to the Big Apple and takes place in the period of time between Election Day and Inauguration Day. According to the show’s official description, the new installment picks up a few months after Carrie stopped a terrorist attack in Berlin. She is living in Brooklyn with her daughter and working at a foundation that provides aid to Muslims living in the United States.

“It’s a strange, transitional time in the halls of government filled with anxiety and different competing interests, where a very fragile and complex transfer of power takes place between the outgoing president and the incoming president-elect,” the description reads.

Showrunner Alex Gansa told E! Online that season 6 will be set in an “interesting time” as a transition and transfer of power is happening.

“In that 72 days, we’re hopefully going to tell an interesting story,” said Gansa.