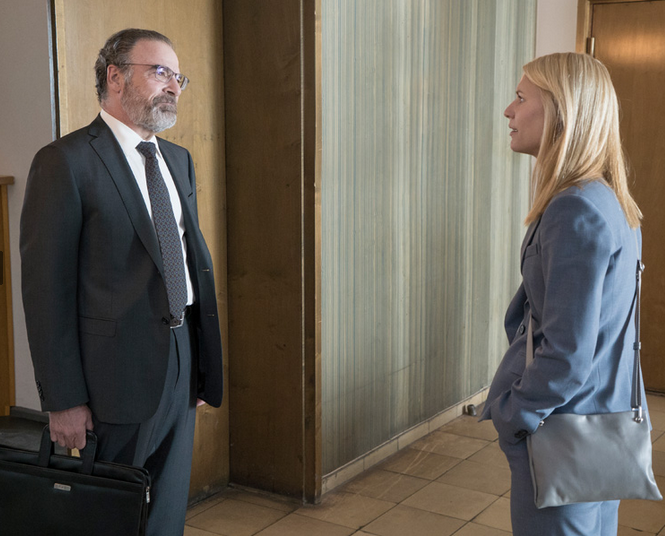 When “Homeland” returns for season five, viewers will see a somehow different take on the format with the series filmed entirely in Berlin, Germany and the characters having new jobs, new relationships and a new time frame.

The story picks up after almost two years on from last season’s finale and the first set of promotional photos for the premiere episode titled “Separation Anxiety” show Carrie Mathison with her roles as a hands-on mother of Franny and the head of private security firm for German philanthropist, Otto.

One of the images depicts that she will cross paths with Mindy Patinkin’s Saul Berenson while the other gives the look of her workmate and future love interest Jonas Happich played by Alexander Fehling.

It is also interesting to note that after Quinn went off the grid in season four, two pictures were shared to reveal that he is working with Berenson who reportedly will be his secret ally. Moreover, in one photo, he can be seen setting up a bomb while an unnamed man is tied on a chair with his mouth taped.

Rupert Friend commented on Quinn’s friendship with Berenson saying, “There is no one on this planet that Saul would put more trust and faith in, than Peter Quinn, it’s a bond that no one else can know about. I think at this point that suits Quinn very well.”

He also teased that, “At the beginning of the season, we find that Quinn’s been in deepest, darkest Syria,” E! Online reports.

Meanwhile, Patinkin mentioned that although Berenson has been passed over as the head of the agency, he enters season five, “Ignited… Saul’s alive and he will do anything it takes to make this world a better place.”

In another news, actor Max Beesley has been cast to guest star for one episode as Mike Brown. He is described as a former Royal Marine who becomes a private military contractor who may not be comfortable working under Carrie.