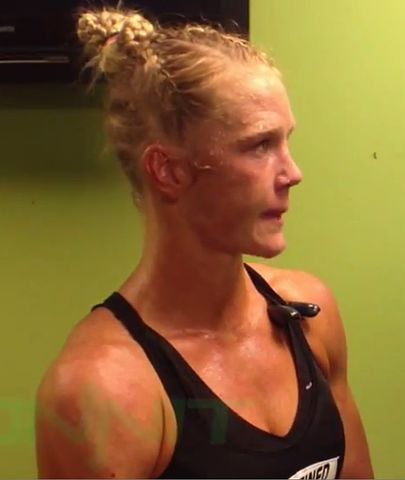 Holm was choked unconscious after refusing to tap to Tate’s second rear-naked choke attempt of the night. The first one came in the second round, but Holm was able to survive and prolong the action.

In his appearance on the “Max and Marcellus” show (through MMA Fighting), White gave props to “The Preacher’s Daughter” because of the way she handled herself during the fight.

“She went out like a gangster. She got choked, she held on, she tried to fight the choke,” White said.

Holm was able to keep herself ahead on the scorecards throughout the fight by using her striking advantage and distance to ward off Tate’s attacks. However, being the more superior wrestler and grappler, “Cupcake” was able to find a way to close the distance and shoot for takedowns.

With regards to Tate’s submission attempts, White still lauded Holm’s efforts to defend herself from the choke. In the second attempt, Holm was trying to get Tate off her back by trying to dump the latter on her head, but Tate refused to let go.

In the end, Tate was able to get the submission, which impressed White greatly.

“Those two women both, the way Miesha took that drop on the head, and the way Holly didn’t tap, gangsters,” White said.

During the fight’s build up, White himself had stipulated that the winner of the fight between Tate and Holm would be facing former 135-pound queen Ronda Rousey.

However, Rousey’s return remains indefinite, as she opts to fulfill her filmmaking obligations at the moment.

As for the women’s division in the UFC, both at bantamweight and strawweight, White is simply overwhelmed with how the way things have run.

“I mean, there’s just so many tough girls in that [bantamweight] division right now, and, as a sport it continues to grow. The 115-pound division with women is [also] getting nasty. Nasty, nasty division,” he said.

'NCIS' season 14 premiere spoilers: McGee and Delilah to get married;...