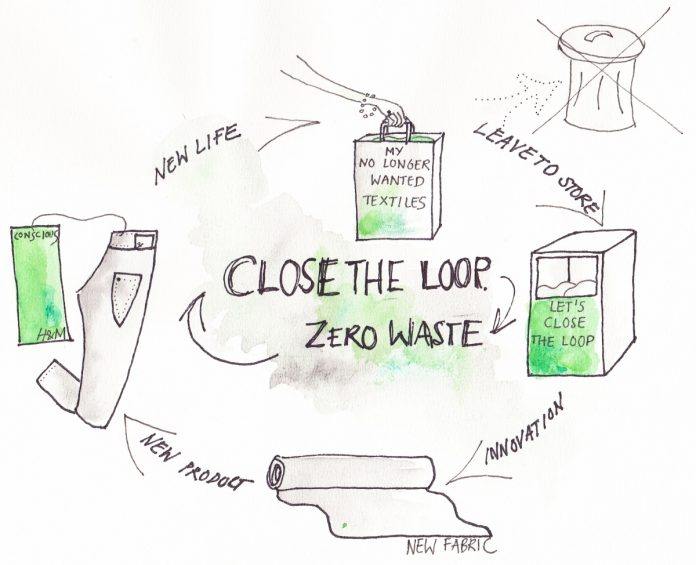 In February 2013, H&M began an initiative that rewarded eight-dollar vouchers to customers who brought a bag full of unwanted clothing (of any brand) to H&M stores. Since then, over 14 million tons of clothing have been gathered all around the world.

Two years later, the Swedish high street retailer has launched its first denim collection made using the collected recycled clothing. Karl-Johan Persson, CEO of H&M spoke about the project saying, “Creating a closed loop for textiles, in which unwanted clothes can be recycled into new ones, will not only minimize textile waste, but also significantly reduce the need for virgin resources as well as other impacts fashion has on our planet.”

H&M is also offering a $1.16 million reward for new techniques to reuse old clothes. “No company, fast-fashion or not, can continue exactly like today,” Persson said. “The largest potential (for the reward) lies with finding new technology that means we can recycle the fibers with unchanged quality.” The “Global Change Award” will be given by H&M Conscious Foundation to five winners who can help the company incorporate more innovative textile recycling techniques.

The company partnered with recycler I:CO to arrange customers’ discarded clothes, choosing items for reselling or shredding. Some pieces can be made into rags or insulation, or undergo further processing to reclaim the cotton fibers. In the coming years, H&M hopes to increase the amount of recycled cotton used in its clothing.

Other companies have also took action to fight against the environmental effects of fashion. Levi’s also works with the same recycling company, and offers a twenty percent discount to customers who bring in used clothes. British clothing company Marks & Spencer also collects old items in their store for recycling.

All pieces in the new H&M collection feature men’s, women’s and children’s clothing that are composed of twenty percent recycled cotton from the collected textiles and eighty percent organic cotton. The collections will be available in all stores worldwide and at H&M’s online stores starting September.