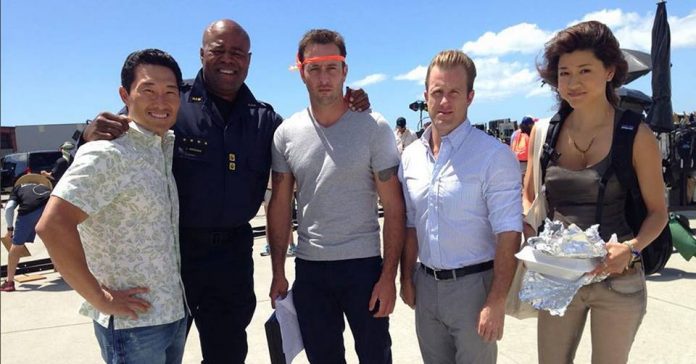 Following the mini heart attack brought about by cast member Jimmy Buffet’s statement that “Hawaii Five-0” is already in its last season, showrunner Peter M. Lenkov went on to clear the air and deny the claim.

The executive producer took to his official Twitter account and said, “Hey @jimmybuffett whoever gave you that info is wrong. Bama is alive and well… For many many MORE seasons. Good luck on the tour.”

Buffet has a recurring role on the show as helicopter pilot Frank Bama, and his latest comments were made while he was promoting his concert tour, “I Don’t Know,” on the “Today Show.”

Despite the initially shocking news, Lenkov appears to have taken everything with a happy disposition since it did seem like just an honest mistake. Lenkov then proceeded to have a conversation with TV Line to further explain things so as to straighten out the misunderstanding. “I don’t know where that came from,” he said. “It was early in the morning and I think they were giving him margaritas or something!”

Season 7 of the Hawaii-set police procedural will have Danny (Scott Caan) and McGarrett’s (Alex O’Loughlin) friendship stronger than ever after what transpired in the season 6 finale. On top of having a new liver, McGarrett is also up for a mini family reunion as Lenkov teased the return of his mother. He is also due for catch-up session with his ex-girlfriend, Catherine Rollins (Michelle Borth)

“We’re going to bring McGarrett’s mom back (played by Christine Lahti), to wrap up the mom/Wo Fat/father mythology, and then start some new storylines in the episode that follows,” he excitedly shared. Both guest actresses are scheduled to appear on the 150th milestone episode of the series.

As for the future of the show, fans can take a breather as the producer stated that in his opinion, they still have at least one more season left on top of the upcoming installment. With that in mind, there are still a lot of stories left to tackle in the long running crime-busting thriller.