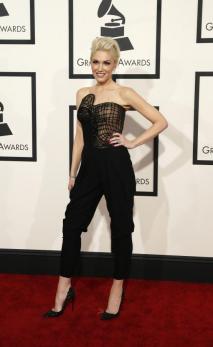 In her second visit to “The Ellen DeGeneres Show” in less than a month, “The Voice” coach and “No Doubt” singer Gwen Stefani talked about her state of mind following her recent divorce from Gavin Rossdale and revealed that she didn’t know current beau Blake Shelton before signing up for “The Voice”.

The 46-year-old singer and mother of three spoke to DeGeneres about her new song “I Used to Love You,” which she sang during her last visit. The two briefly commented on the song, seemingly confirming rumors that Stefani and Rossdale split up because the latter had been unfaithful.

In the episode, which aired Friday, Nov. 20, the singer told DeGeneres that, though she’s still reeling from the divorce, she is “in a good place” and “having a lot of fun now.”

Stefani added: “It’s like a whole new life, a whole new chapter. It’s been so great to be on ‘The Voice’ and be around all that music.”

But it appeared that the talk show host was intent on finding out more about Stefani’s blooming romance. To get the conversation going, DeGeneres surprised her guest by displaying a huge photo of Stefani sitting on Shelton’s lap on the set of their show.

“I don’t know where that came from,” the host teased.

When DeGeneres suggested that the singer probably sits on fellow “The Voice” coach Adam Levine’s lap, too, Stefani agreed, saying, “I’m usually on one of their laps between each commercial.”

Of Shelton, she  said: “I didn’t even know who he was before I was on the show. Before I was on ‘The Voice,’ I had never even heard of him before.”

Stefani went on to say of 39-year-old Shelton: “He knows every single ’80s song. He literally is a musical jukebox. He knows everything about music, it’s crazy.”

The two reportedly began dating in late October, just months after they each separated from their respective spouses.