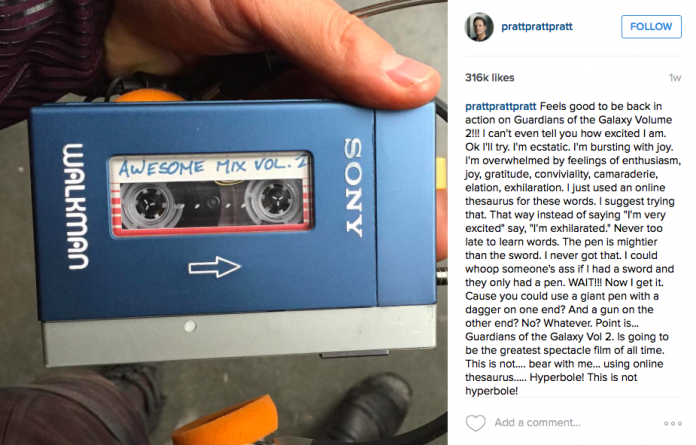 The hype for Disney’s highly anticipated “Guardians of the Galaxy Vol. 2” is steadily rising with the help of its lead star Chris Pratt.

He took to Instagram to share that the production has started for the film. Posting an image of his walkman with the tape dubbed “Awesome Mix Vol. 2,” the actor who plays Star Lord stated on a lengthy caption, “Feels good to be back in action on ‘Guardians of the Galaxy Volume 2!!!’ I can’t even tell you how excited I am. Ok I’ll try. I’m ecstatic. I’m bursting with joy. I’m overwhelmed by feelings of enthusiasm, joy, gratitude, conviviality, camaraderie, elation, exhilaration. I just used an online thesaurus for these words. I suggest trying that.”

“Point is… Guardians of the Galaxy Vol 2. Is going to be the greatest spectacle film of all time. This is not…. bear with me… using online thesaurus….. Hyperbole! This is not hyperbole!” he excitedly concluded.

Director James Gunn also updated his Twitter followers that they were able to had their first table read for the movie. “Our returning cast is even better & our new cast is amazing,” he said.

When asked about how much of the script the cast has read through, he answered with “almost all of it.” Gunn was also asked whether he already cast Star Lord’s father and the new villain, to which he simply replied with “yes” without further revealing who they are.

It was previously rumored that Kurt Russell may be in talks to play the mysterious patriarch of the lead character, while Matthew McConaughey reportedly turned down the part of the film’s main antagonist.

Joining Pratt in reprising their roles are Dave Bautista, Zoe Saldana, Sean Gunn, Benicio del Toro, and the voices of Bradley Cooper and Vin Diesel. Tyler Bates will also return to work on the musical score of the sequel. Meanwhile, Pom Klementieff will join the team as a new character.