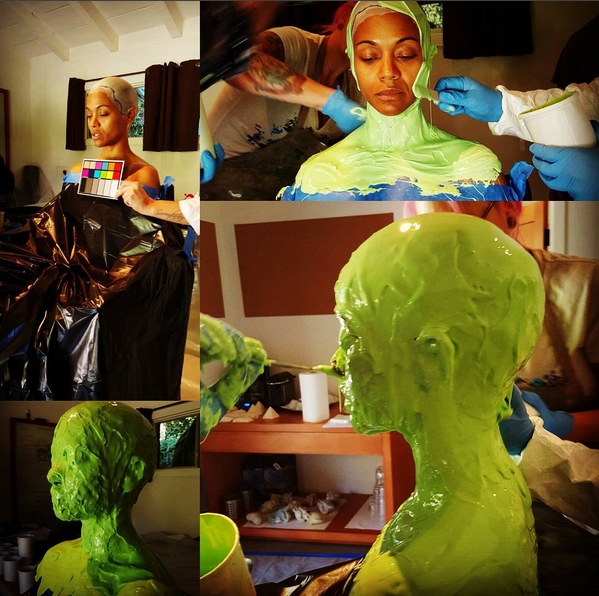 Although the production of “Guardians of the Galaxy Vol. 2” will not start until next year, some of the stars have already started teasing the highly anticipated sequel.

Zoe Saldana recently took to her Instagram to share the making of her intergalactic character Gamora. Seated on the make-up chair with green stuff covering her face, she captioned the photo of her transformation with “Getting ready… #guardiansofthegalaxy #gamora #scifi #marvel.”

Aside from Saldana, it is confirmed that the whole crew of the Guardians will be reprising their parts such as Chris Pratt as Peter Quill or Star-Lord, Vin Diesel as Groot, Bradley Cooper as Rocket Raccoon, and Dave Bautista as Drax the Destroyer.

Meanwhile, joining the cast Pom Klementieff reportedly for the role of Mantis, who based on the original Marvel comics, is a half-Vietnamese, half-German psychic. She is the daughter of the anti-hero Libra and an expert in martial arts. Her special abilities have ties with the alien Kree race and Thanos. As part of the team, she acts somewhat like the ship’s counselor and played a key role in the Secret Invasion crossover in the comic books.

Meanwhile, as reported by Screenrant, writer and director James Gunn shared that the narrative will be more personal as the plot may introduce another character, “At its heart, Guardians is a story about families, and if the first film was about him and his mother, this is a story about fathers. So it’s exciting to go there.”

No official words have been released yet regarding who the father may be. However, based on several hints shown in the first film and Gunn’s explanation that the big screen version will be different from original source materials, the same report speculated that it may be Captain Marvel.

Viewers will remember that the Nova Corps said that Quill’s father comes from an ancient mysterious race, while his mother described him to be “angelic.” On the other hand, Yondu calls him a “jackass.” These all lead to possibility that they will show the original Kree military officer named “Mar-Vell.” His possible inclusion may also bridge the gap for the alien happenings in outer space and Earth.