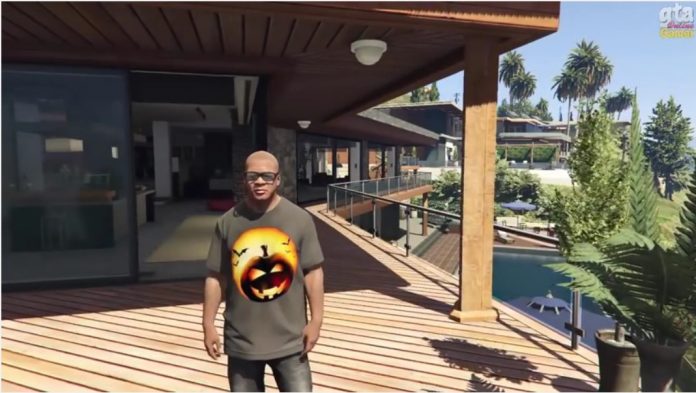 YouTube user DomisLive GTA 5 released last October 3 a video of his Halloween DLC concept for the game. In the video, he emphasizes how he always hopes to get downloadable content for “GTA 5” every year to celebrate the spooky occasion. It seems that this year, his dream will come true.

Most of the concept Dom presents in the YouTube video are for wearable items. The first shirt that he shows viewers has a jack-o’-lantern design. Afterwards, his character changes his outfit to a shirt that says “Keep Calm and Give Me Candy.”

The “GTA 5” fan apparently made a lot of Halloween-themed shirts because he also has others that say “This Is My Halloween Costume.” According to him, his favorite is the one that says “Boo!” and comes with a ghost print. The last shirt concept features a bloody knife with the word “Halloween” on top of it.

Although game developer Rockstar Games has not released any DLC with the Halloween theme ever since the game was released in 2013, DomisLive really sounds hopeful that one will be released this season.

As reported by Christian Today, Rockstar still has not said anything about upcoming DLCs after the Freemode Events DLC was released for the online version of the game.

“We’re definitely working on more vehicles among other things for you to collect for future updates – please make sure to stay tuned here at the Newswire for more info about that soon,” the developer said on their website.

“Grand Theft Auto V” is developed by Rockstar North and Rockstar Games. As the first main game in the franchise since “Grand Theft Auto IV” was released in 2008, the game has received positive feedback from game review websites.