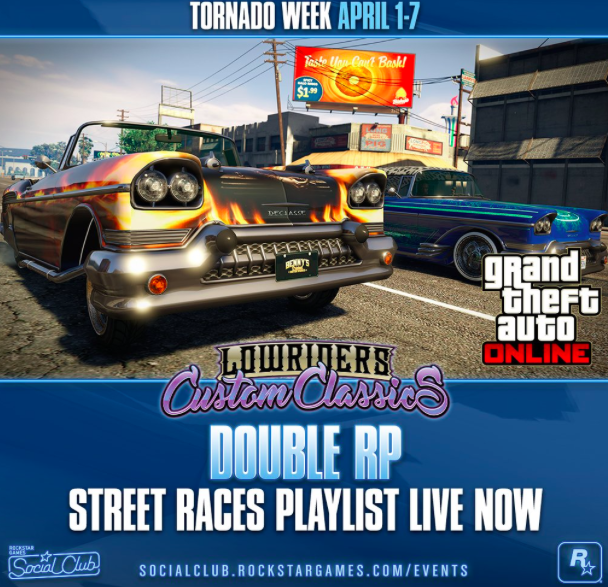 Following the launch of new maps for SUMO mode last week such as Sumo V on top of SS Bulker at the docks and Sumo VI on the roof of Sightings Bar & Restaurant located at the airport, Rockstar has made additional changes for their on-going promo dubbed as “Tornado Week.”

They first unveiled double RP in all of Sumo Adversary Modes including the brand-new ones, contact missions from “GTA Online: Lowriders,” select race playlists which gives more RP bonus when played, street races, and different set of jobs.

All Los Santos Customs and select modifications at Benny’s were also given 25 percent off for players to have the chance to upgrade their ride. When players want to park their vehicle after cruising, they may also visit Dynasty 8 website to avail of the 15 percent markdown on all of the 10-car garage properties.

Aside from the cars and the garages, a discount of 30 percent is also rolling out upon purchasing the Machete, Machine Pistol, and any item in the Lowriders clothing line.

Presumably to keep players engaged in the community, the developers also held a blockbuster live stream on their official Twitch and YouTube channels last April 1 in which they showcased gamers playing new SUMO maps and appearances of all-stars including Ellohime, EatMyDiction, TangentGaming, and BikeMan of Team New Game Plus.

For players who may have missed the first streaming, they may tune in to the second one slated to happen this April 7 at 5 P.M. ET. Rockstar will have huge “GTA” fans Logic, FaZe Clain’s Rain, Adapt and Blaziken, Rhymestyle, and AfroSenju. It is teased that Logic is currently in town as part of the Incredible World Tour and he will stop by New York City for the special live stream event.