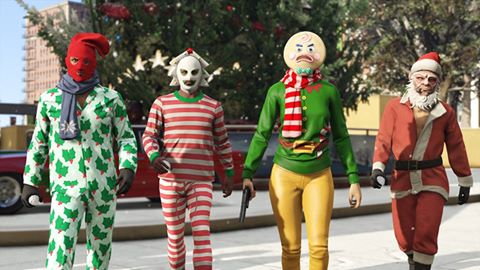 As per usual release of the latest downloadable content pack for “Grand Theft Auto Online,” Rockstar Games recently held a weekend event to celebrate the arrival of “Executives and Other Criminals.”

According to Gamespot, the event that ran from Dec. 16 to Dec. 20 gave double the rewards, RP, and GTA$ for those who participated in some of the new features of the DLC such as Adversary Mode particularly Extraction Mode and sea races.

Prices of the items were also marked down to 50 percent off for Body armor, bulletproof tires, vehicle armor, RPG rockets, sniper rifles, pistol ammo, and gun engravings while 25 percent for Docktease, making it more affordable to reach the new luxury yacht.

A snapmatic contest was also launched with a lucky winner receiving one million dollars in the game’s virtual cash and Social Club Gear Giveaway Sweepstakes.

Players who may have missed the weekend event can participate on the new activity dubbed as “Festive Surprise 2015” made available across platforms PlayStation 4, Xbox One, and PC.

Currently underway until Jan. 5, 2016, the feature brings appropriate seasonal clothes and accessories including new Santa outfits, a new collection of snug pajamas, masks of Mr. and Mrs. Claus, Bad Elf, Crazy Gingerbread, Festive Luchador, and three Christmas-themed car horns. Gamers can also decorate with Christmas trees at Legion Square and their own apartments, stilt houses, and yachts. Those who may have liked last year’s designs can also avail them alongside the original 2013 holiday gifts.

It is also advised that they tune in for special occasions like snowball fights during a rare phenomenon in which there will be a snowfall in Los Santos.

Moreover, another snapmatic challenge is rolling out that rewards GTA$1 M to five winners who posted their best holiday-themed Snapmatic to Social Club and garnered the most favorites among other users. Interested parties have to tag their posts with the hashtag “FestiveSurprise2015” to become eligible.

Outlander season 2 spoilers: Sam Heughan says first half of next...