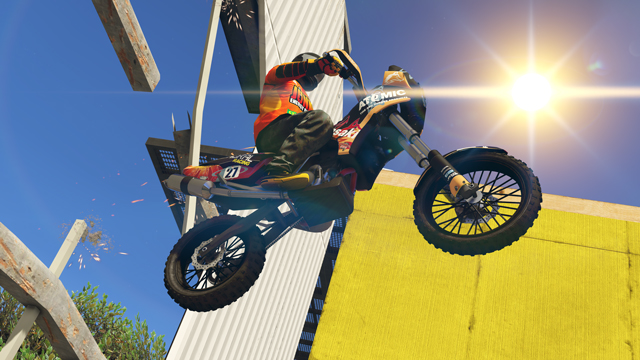 The next “GTA 5” downloadable content (DLC), which is said to be biker-themed, was initially leaked to have an August release. However, recent reports suggest that it has been delayed.

Rockstar was reportedly going to release the “Biker” DLC this August, but a source revealed that they are having problems, the Daily Express reported. It is unknown when the rumored content is going to hit “GTA 5” as tipster Yan2295 said it will be for a while.

The “GTA 5 Biker” DLC was previously reported by iDigitalTimes to have been leaked via the source code of the “Cunning Stunts” update. The tipster FunMW2 shared lines of codes that seem to pertain to a biker theme, five of which are new boss or VIP work/missions: gb_biker_bad_deal, gb_biker_joust, gb_biker_initiation, gb_biker_rescue_contact and gb_biker_vehicle export. The sixth one is am_mp_personal_mod_garage, which was revealed by Yan2295 to be a sixth property.

It is unknown when the “GTA 5” Biker DLC could possibly come out, but some are optimistic that it is already on the way and could arrive in early September, said another report by iDigitalTimes.

Meanwhile, “GTA Online” is in the middle of the Freemode Week, which started Friday, Aug. 26, and will run through Thursday, Sept. 1. Players can earn double Reputation Points (RP) and GTA$ by playing the Freemode events, including Hunt the Beast and those in the “Freemode Events” update back in 2015. There are also loads of discounts available for in-game items, as well as a chance to win up to GTA$100,000 by winning the new Premium Stunt Race “Rally,” as per the Rockstar Newswire.

'Rogue One: A Star Wars Story' news: No jedi for upcoming...