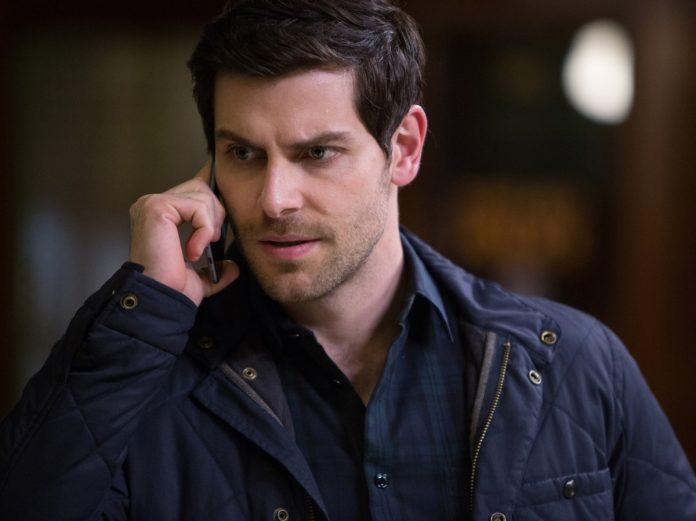 NBC’s supernatural series “Grimm” season 5 is quickly coming to a close with its third to the last episode featuring the balance of power being at stake.

Titled “Bad Night,” Nick (David Giuntoli) will lean on Monroe (Silas Weir Mitchell) and Rosalee (Bree Turner) as he worries that he may potentially lose everything if he continues to fight Black Claw. Meanwhile, Adalind (Claire Coffee) is faced with a very difficult decision in order to protect her children.

In a sneak peek, the narrator states, “His family is taken and he will stop at nothing to get them back” while Nick has been advised, “Sometimes the only way to protect the ones you love is to let them go.” However, he retorts, “I want to kill the people who threatened them.”

Elsewhere, Hank’s (Russell Hornsby) relationship with Zuri (guest star Sharon Leal) takes an unexpected turn and Wu (Reggie Lee) tries to gain control of his new reality. Viewers may remember from the last installment that Zuri started flirting with Hank in the grocery store. It is speculated that she will put him in a position that could possibly thwart Nick’s plan in stopping Black Claw.

Down the pipeline, the season ender will be a two-part special event titled “Beginning of the end, Parts one and two.” Nick and Black Claw are expected to have a deadly showdown as the latter tightens its grip on Portland. He will make a strategic move against Hank that shocks everyone and will put Nick on a war path.

Moreover, Hadrian’s Wall will put their investigation up a notch as they seek a mysterious man named Bonaparte (Shaun Toub), while Adalind and Capt. Renard (Sasha Roiz) learn how to deal with their new and very unpredictable reality concerning Diana (guest star Hannah Loyd).